The gun grabbers want to change the Florida Constitution

Talk to your friends, your neighbors, your fellow shooters — This is an “all hands on deck” fight!

Anti-gunners are trying to change the Florida Constitution

Have you heard that there is a movement afoot to change the Florida Constitution to permanently ban entire classes of firearms and magazines? 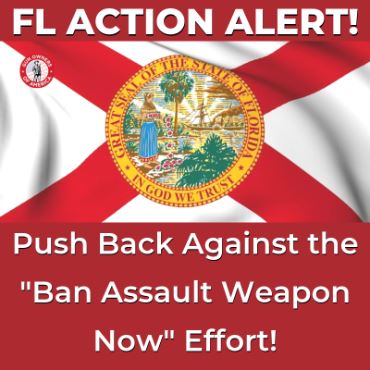 That’s correct, a group of mostly South East Florida people are pushing a state Constitutional Amendment that will permanently ban the sale, ownership and possession of all semi-automatic rifles and magazines with a capacity over 10 rounds.

ANY RIFLE THAT ACCEPTS A DETACHABLE MAGAZINE AND ANY MAGAZINE THAT CAN HOLD MORE THAN 10 CARTRIDGES IRRESPECTIVE OF CALIBER WILL BE BANNED!

All types and variations of the AR15 — BANNED!

Of course, like most other anti-gun proposals we have seen, this too includes some nice words about: “conformity with the Second Amendment to the United States Constitution as interpreted by the United States Supreme Court.”

Those are hollow words, intended to deceive the uninformed.  So far, the Supreme Court has never agreed that banning entire categories of firearms is Constitutional and we doubt they will. But to these people, it doesn’t matter.

Almost 30 years ago, way back in 1990, the Florida Constitution was amended to mandate a three-day waiting period between purchase and delivery of a handgun.  They even included an exemption for holders of a Florida Concealed Weapons license, which at that time had only been in existence for three years.

Because of this amendment and exemption, it has become exponentially more difficult to even get a true Constitutional Carry bill introduced in the Florida Legislature.  Much less to legalize open carry.

Furthermore, the existing, constitutionally-mandated waiting period, made it even easier for the 2018 Florida Legislature to extend that wait to purchasers of rifles and shotguns because a wait was already enshrined in the Florida Constitution.

And now anti-gunners are trying to get a Constitutional Amendment onto the 2020 General Election ballot.  They think they can win.

But first they need to get over 750,000 Florida voters to agree to place their gun banning amendment on the 2020 General Election ballot.  Here’s where you come in.

Fortunately, the news is not all bad.  Our friend, Luis Valdes — who is a member of Florida Carry and who also writes in The Truth About Guns — is reporting that the legislature saw that ballot initiatives, on any subject, could be influenced by outsiders, non-Floridians, and they took action to stop this meddling.

HB 5 was amended to require, among other reforms, that petition gatherers must be registered with the Secretary of State, provide a Florida address and verify (under penalty of perjury) that the petition was signed in the gatherer’s presence.  HB 5 also includes fines for petitions submitted more than 30 days after they were signed.

Please let all of your gun-owning friends, family members and fellow shooters know about this plan to disarm you.