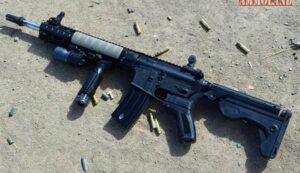 In a statement, Erich Pratt, Senior Vice President of GOA and GOF, said: “We’re pleased to continue the battle against the ATF’s unconstitutional ban on bump stocks. As shown by their Proposed Rules on homemade and braced firearms, this rogue, lawless agency seeks to chip away at the rights of law-abiding gun owners. And this is why it is vitally important that their actions — including their ban of bump stocks — do not go unchecked. GOA and GOF will continue to hold the ATF accountable for its repeated assaults upon the Second Amendment rights of gun owners.”

The Gun Owners of America initially argued the case in front of a panel of judges on December 11, 2019. From the panel’s questioning of the government, most legal experts expected a positive outcome for gun rights. A few months later, in May, a three-judge panel from the Tenth Circuit Court of Appeals ruled in favor of the government in Aposhian v. Barr. On September 10, 2020, The Tenth Circuit granted a rehearing en banc.

En banc means the entire bench will hear the case. The prior ruling of the panel is vacated, meaning it is like it never happened. The declaration of the Tenth Circuit worried some pro-gun advocates since Circuit Courts do not like to give contradictory rulings. But on March 25, 2021, the Sixth Circuit handed down a decision by a 2-1 margin that stated bump stocks “are not a machine gun.”

The Sixth Circuit ordered the District Court to grant an injunction against the bump stock ban. The federal government asked for an en banc hearing. The Sixth Circuit granted the government its request, thus vacating the panel’s pro-gun decision. Because an en banc hearing is basically a “do-over,” attorneys for Gun Owners of America lead by Robert Olson had to file a new brief in the case stating why that the plaintiffs believe that the Bureau of Alcohol, Tobacco, Firearms and Explosives (ATF) didn’t have a right to ban bump stocks.

The government is claiming that it has Chevron deference when it comes to the definition of a machine gun.

Chevron deference stems from Chevron U.S.A., Inc. v. Natural Resources Defense Council. In that case, the Supreme Court of the United States (SCOTUS) ruled that if a statute is ambiguous, then deference is given to the regulatory agency.

Olson makes the case that “Chevron does not apply because the statute is not ambiguous.” GOA argues that the statue does not have any gray areas. The definition of a machine is clear. With a single function of the trigger, the gun fires multiple rounds. A bump stock doesn’t work in a similar way. The trigger needs to be pulled for each round to fire. A bump stock uses the recoil of the rifle to speed up firing. The same effect can be accomplished by using a rubber band or belt loop.

The original panel concluded that Chevron does not apply because this is a criminal statute. In the ruling, the majority wrote, “no deference is owed to an agency’s interpretation of a criminal statute.” Olson agrees with the panel, and GOA has case law on its side. In the United States v. Apel, the Supreme Court wrote, “we have never held that the Government’s reading of a criminal statute is entitled to any deference.” Also, in Abramski v. the United States, SCOTUS wrote, “criminal laws are for courts, not for the Government, to construe … ATF’s … position … is … not relevant at all” and “a court has an obligation to correct [the agency’s] error.”

The supplemental brief argues that “a president’s political objectives do not receive Chevron deference.” It can’t be argued that President Trump wasn’t the catalyst for the change to the definition of a machine gun. In 2018, he stated that bump stocks should be a machine and ordered the ATF to “write out” the device, but Trump did not have the expertise to make the claim that bump stocks were machines and didn’t have the power to order the ATF to “write out” the product.

Deference is given to agencies because they are assumed to have “expertise” in “highly technical” areas of the law. The Firearms and Ammunition Technology Division (FATD) of the ATF first reviewed bump stocks in 2008 and determined that the device was not a machine gun. For the next nine years, the ATF held firm in its opinion that bump stocks were not machine guns and repeatedly issued opinion letters on the subject. It wasn’t until the President order the agency to redefine a machine gun that bump stocks were banned. The government claims that bump stocks are machine guns because it allows “continuous firing initiated by a single action by the shooter.” This definition is different than a “single function of the trigger.”

The decision to make bump stocks a machine gun was one of the President’s policy goals.

GOA makes the case that Chevron deference cannot be used for a policy goal. Case law seems to be on their side. In Utility Air Regulatory Group v. EPA, SCOTUS ruled that an agency may not “rewrit[e] …unambiguous statutory terms” to suit “bureaucratic policy goals.”

Olson points out that Congress did not delegate to ATF the authority to define or redefine the term “Machinegun.” This fact is important because the courts have ruled that only Congress has the power to write new federal criminal law. In the United States v. Davis, SCOTUS wrote that “[o]nly the people’s elected representatives in Congress have the power to write new federal criminal laws.”

GOA says that even if the statute were ambiguous, then it is Unconstitutionally vague. The gun-rights groups argue that the “Rule of Lenity” applies here. Ambiguities in criminal statutes have always been interpreted against the government. In this case, the government is arguing that ambiguities should be ruled in favor of it, which would break new ground in case law.

The final point Olson makes is that “deference here will only further embolden ATF’s lawless actions.” Many consider the ATF to be out of control. The ATF is trying to use deference to shut down the unfinished firearm frames and pistol-stabilizing brace markets. Many do not believe that the agency has the power to do so because they would be making de facto laws. If GOA is successful in the bump stock case, then it could throw a monkey wrench into the ATF’s future plans.

There is no timeline for a final decision in the bump stock case, but the bump stock war is far from over. Both sides are expected to appeal a negative outcome to the Supreme Court.