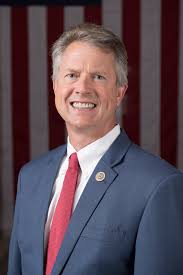 On Tuesday, Marshall introduced the Home Defense and Competitive Shooting Act of 2019. This would change provisions of the National Firearms Act of 1934 (NFA) that put extra restrictions on the ownership of short-barreled rifles—that is, rifles* with a barrel shorter than 16″ in length or that have a total length of less than 26″.

The NFA requires owners of short-barreled rifles to register them with the federal government; they must also pay a one-time $200 excise tax per gun. If Marshall’s bill becomes law, these extra requirements would disappear; short-barreled rifles* would be regulated under the same rules as semiautomatic rifles.

The legislation would also order the Bureau of Alcohol, Tobacco, Firearms and Explosives to destroy all current short-barreled rifle registration records within 365 days of the law’s enactment. Information about those who already own these weapons would thus be erased from the federal database…

Gun lobbying groups have praised Marshall’s bill for, as Gun Owners of America (GOA) puts it, attempting to undo the “egregiously unconstitutional registration, taxation, and regulation of short-barreled rifles.” GOA is joined by the National Rifle Association, which supported the NFA back in 1934 but now backs Marshall’s bill.