The nastiest, most unconstitutional bill in billionaire Michael Bloomberg’s gun confiscation arsenal is, unfortunately, now being taken seriously in Little Rock.  The bill is Senate Bill 621. 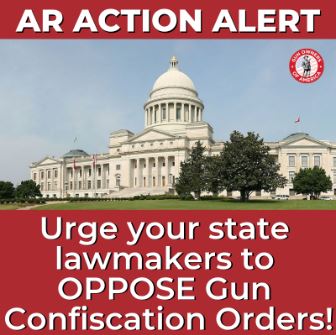 The bill — which is largely cut-and-paste out Bloomberg’s anti-gun playbook — would call for the issuance of Gun Confiscation Orders by a “secret” (ex parte) court, in which the gun owner is not allowed to appear or present his side of the story.  The order would strip the gun owner of his Second, Fourth, Fifth, and Fourteenth Amendment rights.

Rather, like the dystopian movie Minority Report, all they have to show is that the gun owner is a “risk.”

We know a little about ex parte proceedings.  And, when the accuser is the only one in the room, a judge will sign anything put before him. In an analogous proceeding in New Mexico, a judge issued a restraining order against David Letterman for supposedly sending a New Mexico housewife secret coded messages over her TV set.

The next thing that happens is when the SWAT Team arrives in the middle of the night, ready to ransack the gun owner’s home and, if he resists, to arrest kill him.

In Ferndale, Maryland, Gary Willis, a 60 year-old gentleman was shot to death by police serving a “red flag” Gun Confiscation Order at 5:17 in the morning.

Sure, if you survive, you can spend $10,000, hire an attorney, and try to convince the judge he made a mistake — AFTER YOU’VE LOST YOUR GUNS.  This is almost never successful.

So initially, Bloomberg and the anti-gun lobby tried to convince Republicans that this was a “modest proposal.”  And we suppose, in the Jonathan Swiftian sense, it was.  Virtually all Republicans now know better.  But there are still some Arkansas GOP legislators who don’t understand how insidious this proposal is.

So we’re asking that you contact (ABOVE) your state representative and state senator and ask them to oppose red flag Gun Confiscation proposals.