Maine is not New York.

So it is a bit alarming that legislation backed by billionaire gun-hater Michael Bloomberg has just been introduced in Augusta. 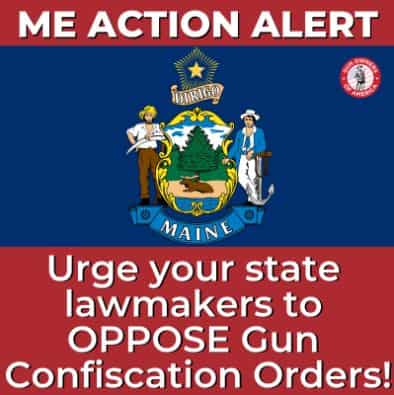 Under the bill, police or an “angry ex” could hold a “secret” (ex parte) court hearing in order to strip a gun owner of his Second Amendment rights.

They don’t need to show that the gun owner has committed a crime.  (In fact, this would bar him from owning a gun in and of itself.)

They don’t need to show that the gun owner will EVER commit a crime.  All they need to show is that he supposedly poses a “danger.”

Incidentally, if it’s any indication of how crazy this bill is, the secret court can be convened by any “adult related by consanguinity or affinity to the respondent.”

This particular error is common to a lot of Bloomberg-drafted legislation of this type, and it’s indicative of the fact that compliant legislators like Millett easly bow to the demands of a New York gun controller like Bloomberg.

The first thing the gun owner would learn of the proceedings is when the police arrive in the middle of the night, ready to ransack his home and, if he resists, to arrest or kill him.

In Maryland, a 60-year-old gentleman was shot to death by police serving a “red flag” Gun Confiscation Order at 5:17 a.m.

So, assuming he survives, the gun owner can try to convince the judge that he made a mistake.  This seldom works.

The bottom line:  With only two exceptions, the only states that have enacted Gun Confiscation Programs such as these are gun-hating states that register and ban large categories of firearms.

Now Maine is being asked to join them.

But understand this: “red flag” laws didn’t stop the Sandy Hook shooter (in 2012) … or the Thousand Oaks, California killer (last year) … or the Aurora, Illinois gunman (this year).

And they wouldn’t have stopped Parkland, where the shooter was viewed by police as “a low risk.”

Rather, they only allow gun grabbers to put “points on the board,” in anticipation of the day when they have the political strength to take all of your guns.