Tell Democrat Senators to Vote Against the ATF Director Nominee

On Thursday, the Senate Judiciary Committee will be voting on Chuck Canterbury, who is the President’ pick to head the Bureau of Alcohol, Tobacco, Firearms, and Explosives (ATF). 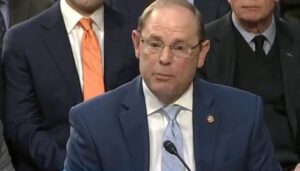 Canterbury headed the Fraternal Order of Police and articulated several anti-gun positions during his tenure there.

Please add your name to the pre-written letter (above) which urges Democrat Senators to vote against Canterbury as the new ATF head.

This pick to lead the ATF represents another troubling nominee, who has been selected to fill an important position in the administration.

We pointed out that since Democratic Senators were routinely opposing Trump nominees like this, as few as four Republican Senators could vote “no” and sink Barr’s nomination.

Unfortunately, the Senate confirmed Barr. And so now Barr is roaming the halls of the Senate pushing the central legislative goals of the Bloomberg/Giffords anti-gun lobbies.

Cleaning up this mess has become massively more difficult than if Senate Republicans had done the right thing from the start.

Now, we’re in exactly the same situation with the nominee for the ATF head, Chuck Canterbury.

Canterbury had led an organization which supported Universal Gun Registries.

He supports “red flag” gun confiscation orders and has indicated he is open to supporting a ban on semi-automatic firearms — the so-called Assault Weapons ban.

So please add your name to the pre-written letter (above) urging Democrat Senators to vote against Chuck Canterbury as the new ATF head.

Thank you so much for taking action!