I was pleased to join hundreds of GOA members and supporters, who attended the Pennsylvania Senate Judiciary Committee gun control hearings on September 24th and 25th.

Because the gun confiscation advocates — including CeaseFirePA, Gabby Giffords’s group, Moms Demand Action and Everytown for Gun Safety — were there to give hours-worth of testimony. 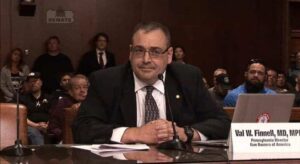 As the Pennsylvania GOA Director, I testified on behalf of GOA members.

Others speaking in support of the Second Amendment were Dr. John Lott, Joshua Prince, Esq, Kim Stolfer of Firearms Owners Against Crime, Dr. Chip Gallo, Walt Gibson, and the NRA.

Again, there was great turnout from our side. But the battle is far from over!

The Senate Judiciary Committee is considering several bills that may come up for a vote including “Red Flags,” universal background checks, registration schemes, “lost and found” legislation, and gun bans/magazine restrictions.

Every member of the Senate Judiciary Committee needs to hear from you!

A ray of sunshine in this mess is that House Judiciary Committee Chairman, Rob Kauffman, stated that none of these bills will advance in the House.

Regardless, the Senate Judiciary Committee needs to hear from you today (see above). Let them know that your Constitutional rights are not subject to any “balancing test.”

Chuck Canterbury Nomination is Postponed Because of Strong Grassroots Activism!