Urge you Representative and Senators to oppose gun control in the CJS spending bill (H.R. 3055)!

Anti-gun Democrats are at it again, trying to sneak gun control into must-pass spending bills. 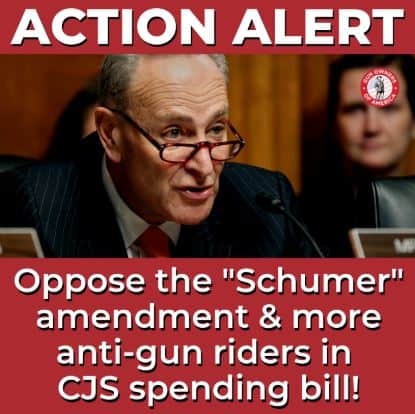 And it is clear that House Speaker Nancy Pelosi and her Democrats are playing “hardball,” while the GOP often plays “cotton ball.”

Here’s the issue: The House is getting ready to take up its version of the money bill for the Department of Justice, plus the science agencies and the Commerce Department (H.R. 3055).

And Democrats are loading the bill with all kinds of anti-gun riders.

When Republicans were in charge, they repeatedly accepted anti-gun Commerce-Justice-Science (CJS) riders like the Schumer amendment.

This amendment would make it impossible for federal minor white-collar offenders to ever get their gun rights back.

In exchange for the Schumer amendment, Democrats would make minor pro-gun concessions like prohibiting Obama from arming Mexican drug cartels (the Fast & Furious amendment) — or conceding that imported shotguns might have a “sporting purpose.”

Well, now the Democrats are in control of the House. And the Schumer amendment is still there.

But gone are the pro-gun “Quid Pro Quos” which Republicans had gotten in exchange for Schumer when they were in charge.

Gone is the amendment which would prohibit the government from blocking certain shotguns from being imported.

Gone is the amendment prohibiting the government from coercing banks and credit card companies to bankrupt gun dealers and manufacturers by cutting off credit and banking services — the “Operation Choke Point” amendment.

Gone is the amendment prohibiting the administrative implementation of the UN arms trade treaty — with its gun bans and forced registration — all without Senate ratification.

Gone is the amendment ensuring that curios and relics can continue to be imported into the US.

And gone is the “Fast & Furious” amendment which would prohibit the ATF from arming Mexican drug cartels.

During the Fast & Furious scandal, federal officials funneled firearms to known criminals, so the Obama administration could then use the subsequent body count in Mexico to push for additional gun control here in the U.S.

Rather than prohibiting programs like Fast and Furious, the bill has some weasel words in Section 215 which allows the ATF to conduct a similar program.

So for those who want to further restrict the civilian ownership of firearms — and for those in Mexican drug cartels — the Democrat’s CJS appropriations bill is definitely their “ticket.”

For all others, we are demanding a vote against final passage.

By the way, we should mention that ATF’s budget of $1.439 billion in this bill would represent an increase of $122 million over last year and over $70 million above what ATF asked for.

And no less than $27.5 million would go to disarm veterans under the Veterans Disarmament Act of 2007 and the Fix NICS provision (from 2018). As you may remember, these two laws now have a major pot of money set aside to take away guns from law-abiding veterans, simply based on a psychiatrists’ diagnosis.

Please take action by emailing your Representative and Senators (above) in opposition to H.R. 3055.