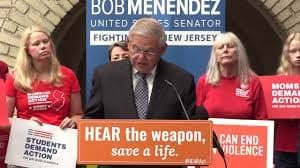 “We were reminded how dangerous silencers can be a few weeks ago, when a gunman used a .45 caliber handgun fitted with a suppressor to kill 12 Americans in Virginia Beach.  What first sounded like a nail-gun ended up being gunfire,” Menendez said in a statement.  “The sound of gunshots is what tells you that your life is danger, and that it’s time to run, hide, take cover, call the police and help others save themselves.  At the end of the day if you can hear a weapon you might just save a life…”

Gun rights groups have opposed the outright ban of suppressors, also known as silencers. In fact, the firearms industry pushed for the Hearing Protection Act of 2017, which would have deregulated the firearm accessory. As it currently stands, suppressors are highly regulated. Currently, anyone who wants to purchase a sound suppressor must undergo the National Firearms Act’s application process, pay a $200 stamp fee, a background check and wait a long period of time, generally 9 months to a year. The Hearing Protection Act of 2017 would have removed suppressors from the NFA and treated it as a regular firearm under the Gun Control Act of 1968 (GCA)…

“GOA is opposed to the National Firearms Act and its current restrictions on suppressors, and GOA will oppose any legislation, like the Menendez bill, to ban them. Suppressors are safety devices that act more like a car muffler, rather than the Hollywood notion of a ‘silencer,’ which is a myth,” Gun Owners of America’s Senior Vice President Erich Pratt told Townhall. “So while suppressors don’t reduce the sound of a gun shot to a whisper, as so deceptively portrayed in many movies, they are a health benefit, which is why the CDC recommends that people use suppressors to protect their hearing.”