Call Governor Chris Sununu and urge him to veto every gun control bill that will be sent to him by the anti-gun General Court. You can use the contact form below, which will provide you with a call script. (NOTE: You can simply enter your area code, followed by seven random digits.)

We have been warning you about four separate gun control bills that are being considered in the General Court. 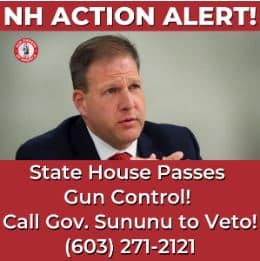 Last week, the House of Representatives moved all four bills along — sending two of them to the Governor and the other two to conference committees to work out the differences between the Senate and House passed versions.

I’m very concerned that Governor Chris Sununu might be willing to make a deal, so I am asking all GOA Members to keep the heat on.

The Governor has announced his support or opposition to a long list of non-gun bills. But sadly, he has been silent on the four gun control bills, and that’s why he needs to hear from you.

Here’s a quick review of what we’re facing:

Furthermore, there is nothing in HB 109 that will require gun dealers, which are private for-profit businesses to process these transfers. And even if a dealer agrees to do this extra work; there is no limit on what the dealer may charge.

But that’s not the worst of it, under Federal law, if a transaction receives a “NICS delay” the dealer may transfer the gun to the buyer after 3 business days.

HB 109 does away with this and prohibits transfer of firearms unless and until the dealer receives a “NICS proceed.”  A future, anti-gun administration could easily delay every NICS transaction — and since HB 109 outlaws private sales, it will create a de-facto ban on transfers, sales, gifts and loans of firearms in New Hampshire.

HB 514 also includes, for the first time ever in New Hampshire, a mandatory training requirement brought to you by way of the notoriously anti-gun New Hampshire Fish and Game Hunter Education program.

Last year my son and I attended such a class. They had signs proclaiming the classroom to be gun and ammo free, and these programs have historically been used over the years to indoctrinate our youth against the carrying and use of loaded guns.

And that only provides an exception to the wait for rifle and shotgun buyers.  Handgun buyers will be forced to wait to exercise their rights.

This bill would allow the “guardian-in-fact” of a “vulnerable adult” to strip a New Hampshire resident of his Second, Fourth, Fifth, and Fourteenth Amendment Constitutional rights through a “secret” telephone call — with no hearing whatsoever — and no chance for the accused to defend himself or to state his point of view.

Despite overwhelming opposition at the April 30 and May 7 public hearings — as well as the public hearings held by two House committees, and an outpouring of calls and letters from those who were unable to attend the hearings — the Senate ignored you and voted all four bills “ought to pass.”

Rep. John Burt, who is one of our strongest supporters, correctly predicted that the House would accept the Senate’s changes.

He recently told me that he does not expect the members of the Conference Committees for HB 564 and HB 696 to substantially change these bills because the Speaker and Senate President packed the Committee with far-left, anti-gun radicals.

At this time, we are asking all GOA Members to keep contacting Governor Sununu and asking him to veto all of these unconstitutional infringements.

Even though these bills were amended, they have not been substantively changed.  They will make New Hampshire a dangerous place.

Please be polite but firm when you remind Governor Sununu that he has said, many times, that New Hampshire gun laws are fine and don’t need changing.  This is the exact same position taken by both of his Democrat predecessors.

You can also call him using our contact system (above), as that will also provide you a call script.

HB 109 and HB 514 can land on Governor Sununu’s desk at any time, so please urge him to veto both.

Please also let him know that you are opposed to HB 564 and HB 696 — and should the House and Senate conferees reach an agreement — you expect him to veto those as well.