Urge the Senate Judiciary Committee (below) to reject the anti-gun amendment to S 90 which guts concealed carry in North Carolina! The system will send your email to every member of the committee. 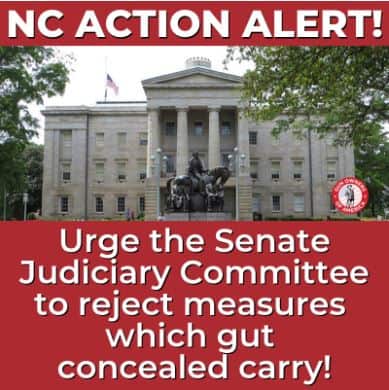 This is very important because the prohibition on church carry makes worshipers particularly vulnerable to violent surprise attacks like the one a few years ago in Charleston, South Carolina.

But here is the problem: Bowing to pressure from the North Carolina Sheriffs, the Republicans in control of the Senate Judiciary Committee have completely rewritten S 90 into a long, complex bill that only a bureaucrat could love.

S 90 has become an anti-gun behemoth that effectively changes North Carolina’s “shall issue” concealed carry law into a “may issue” law similar to New York, New Jersey or California.

And to make matters worse, it continues the legacy of “Jim Crow” gun control. As explained by GOA Legislative Counsel Michael Hammond:

Requirements for a pistol purchase permit date back to the Jim Crow laws following the Civil War and include a subjective finding that the applicant is of “good moral character.”

And, although the new language tries to assure us that they can’t look into the applicant’s “criminal history” more than five years back, there is still enough leeway to allow virtually any applicant to be denied a Class A carry permit by an anti-gun sheriff.

We have spoken with law enforcement … with a North Carolina attorney … and with the head of Grass Roots North Carolina … and they all agree that your “criminal history” could include any parking ticket, speeding ticket, or minor misdemeanor charge — even if the prosecutor did not move forward with the charge.

So the new class of potential disqualifiers becomes so enormous that the decision on whether to issue a license effectively becomes subjective.

Currently, due to backlash of gun owners in North Carolina, S 90 has been currently pulled from the committee. However, this in no way means that the bill is dead.

Gun owners needs to keep up the pressure on the committee to ensure that it does not come up again.

Instead of gutting S 90, the committee should push for a true Constitutional Carry law and repeal of the antiquated purchase permit so that law-abiding citizens can freely exercise their Second Amendment rights in North Carolina.

We need you to take action now. Please contact the Senate Judiciary Committee (above) and demand that they defeat the anti-gun substitute for S 90, and revert it back to the original, as-introduced bill allowing for concealed carry in churches.