The Daily Caller has released a memo being circulated by Attorney General William Barr to coerce weak-kneed Republican Senators into passing gun control.

He’s bringing the Toomey-Manchin Universal Background Check and Registration Bill back from the dead after Republicans defeated it in 2013. 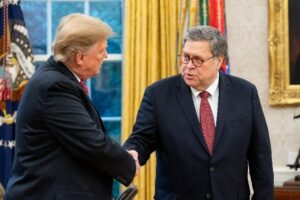 What’s different this time? Barr is lying to Senators about what this new bill would do.

Here’s the truth: under this bill, virtually every single gun owner would have a Form 4473 or an indistinguishable “Bill of Sale / Chain of Title” for your firearm.

And given that ATF is already illegitimately scanning 4473 forms into a national registry — as seen here and here — this will only exacerbate an existing problem.

We need your help cutting through Barr’s lies and getting the truth out to Republican Senators before they take our country down a dangerous road where Americans like YOU are added to a government registry for exercising our constitutional rights.

Please add your name to our pre-written letter informing Republican Senators about the TRUTH behind this deceptive gun grab and warning them that if they vote to slash our rights, gun owners won’t vote to re-elect them.

William Barr claims that this bill would deal only with “commercial” transactions, but deceptively defines “commercial” to include virtually EVERY private sale.

And because your purchase will be on file with the ATF, when a future President Beto O’Rourke (or Joe Biden) decides it’s time to come “take your AR-15,” they’ll know who has them and where you are.

Gun Owners of America tried to warn the Senate and President Trump about nominating an anti-gunner like William Barr to be the Attorney General of the United States, given his previous support for a semi-auto ban.

We hope that this time — with the help from voters like you — we can successfully warn the Senate to strike down Barr’s gun control push and prevent America from taking a dark and dangerous turn.

Please add your name to our pre-written letter informing Republican Senators about the TRUTH behind this deceptive gun grab and warning them that if they vote to slash our rights, gun owners won’t vote to re-elect them.