Immediate Phone Calls Needed to Your Senators Against Gun Control

Democrats Soft on Terrorists, Hard on Gun Owners
— Some Republicans May Cave

ACTION:  It is urgent that you call your Senators right away and urge them to OPPOSE all the gun control legislation that may be voted on soon.  You can reach your two Senators at 202-224-3121.

Your Second Amendment Rights are Under Attack … Again

Please call the Capitol Switchboard at 202-224-3121 and ask to speak to your two Senators. 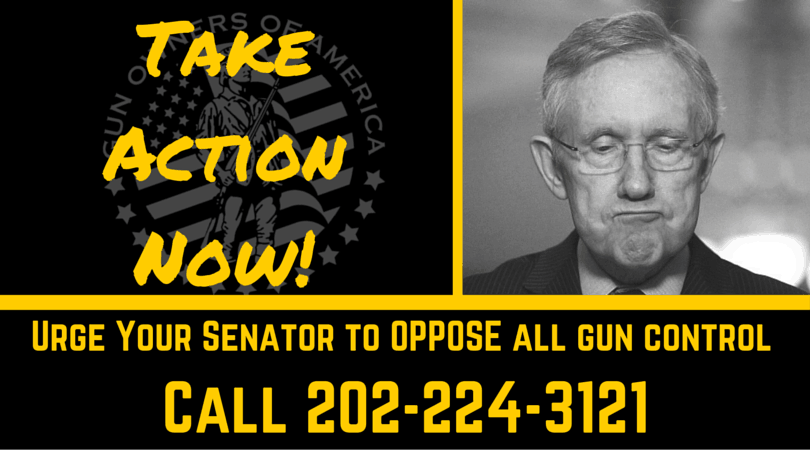 Anti-gun groups are having people call their Senators to push them to vote for gun control legislation that will threaten YOUR RIGHTS.

And people are calling by the thousands to support gun control.

Of course, your Second Amendment rights will be sacrificed — all in the name of stopping people from buying guns if they’re on a government watch list.

Here’s What We Know

He wasn’t being currently investigated by the FBI.

He passed numerous background checks, and was a licensed security guard in a courthouse.

Thus, no amount of proposed federal gun control could have prevented the Orlando terrorist from purchasing a gun.

This killer WAS an ISIS-loving terrorist who openly expressed his desire to engage in mass murder prior to his 911 declaration from the Pulse nightclub.

He WAS the subject of an FBI investigation two years ago, and the FBI gave him a pass.

And he committed his atrocity in a Gun-Free Zone, where all the victims were disarmed by law.

Not surprisingly, the anti-gun Democrats in Washington are ignoring all this — and are pressing for gun control legislation to pass soon.

Several Senate votes are expected on different pieces of legislation.  Some are horrid.  Others are bad, but just not as awful as the horrid bills.

Anti-gun Senator Dianne Feinstein (D-CA) will force a vote on legislation that allows the Justice Department to block gun sales to those on terror watch list.

But while absolutely anyone can be placed on this list, there is no way for you to know if you’re on the list or not.

In order to get off the watch list, you have to first challenge to Justice Department administratively, and then sue them.

There is also text by Senator Chris Murphy (D-CT) to impose Universal Background Checks — which would essentially result in universal registration of gun buyers.

Finally, there may be some Constructive Republican Alternative Proposals (CRAP) that may be offered.  These CRAP proposals are changing, almost minute by minute, so we will examine them and alert you as soon as possible.

But bottom line, you simply need to tell your Senators to vote AGAINST all gun control this week.

And while you’re at it, tell them to vote FOR dismantling Gun-Free Zones and establishing concealed carry reciprocity — two things that actually could have made a HUGE difference in Orlando.

Tell them to VOTE NO on any gun control legislation that comes up this week — including the Feinstein and Murphy amendments.

Keep the Pressure on Your Senators