Urge Your Exec. Councilor to Oppose the Anti-Gun Patch Nomination

Please copy-and-paste the letter provided below and send it to your Executive Councilor using the links provided below. Urge him to oppose the anti-gun David Patch nomination.  You can also call your Councilor at (603) 271-3632.

I need your help in stopping an anti-gunner from continuing his position on the New Hampshire Fish and Game Commission.

While this Commission is tasked with some worthwhile goals, they have effectively become an anti-gun lobbying arm of Michael Bloomberg. 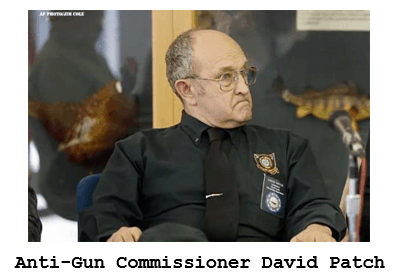 The Commission is made up of 11 citizens who are nominated by the Governor and confirmed by the Executive Council.

The Fish and Game Commission’s serves as the “stewards of the fish, wildlife, and marine resources of the state of New Hampshire…”  They are also charged with setting general policy for conservation and public education.

But sadly, the Commission has become nothing more than a group of anti-gun activists with a fancy name.

Why is the Fish and Game Commission Opposing Constitutional Carry?

This year alone, the Commission took a unanimous vote to oppose Constitutional Carry which was signed into law by Governor Chris Sununu on February 22.

They are also actively opposing HB 84 which will decriminalize the carrying of loaded rifles and shotguns in cars.

David Patch is currently the Vice Chairman of the Commission.  He seconded the motion made by anti-gun Commissioner Walter Morse (Hillsborough County) to oppose SB 12, Constitutional Carry.

The Commission then voted unanimously to oppose Constitutional Carry and decriminalizing carrying rifles and shotguns in cars.

Urge your Executive Councilor to Oppose the Patch Nomination

So here is where you come in.

I need you to contact your elected Executive Councilor and urge him to oppose the Patch nomination which may be voted on as early as April 19.

You can see who your Councilor is here.

Our partners at the New Hampshire Firearms Coalition have posted several alerts on their website explaining their anti-gun activities in detail.

In response to their calls for his defeat, David Patch contacted NHFC to complain about their alerts.

He must think that Granite Staters are stupid because he actually claimed to support the Second Amendment and blamed his anti-gun votes on some unnamed attorney’s opinion which claimed the language in SB 12, Constitutional Carry was “unenforceable”!

This is a smokescreen being used to deflect attention from his anti-gun activities.

You can click here to contact your Executive Councilor.  Simply copy the letter below … click on your Councilor’s email address … then paste the text into the email and send it to him.

You can also call him at (603) 271-3632.  The Council office is open during the week, and you can leave your message with the receptionist.

Please also urge Governor Sununu to withdraw the nomination of this anti-gun activist.

You can call the Governor’s Office at (603) 271-2121 or use this form to send an email: https://business.nh.gov/nhgovernor/comments.asp

We must defeat the Patch nomination so that we can refocus the Commission back to its traditional role of conserving and protecting wildlife and stop the anti-gun activism at the Fish and Game Department.

On April 19, please vote against the nomination of David Patch to the New Hampshire Fish and Game Commission.

As a Commissioner, David Patch seconded the motions to oppose SB 12 Constitutional Carry and HB 84 to end the ban on loaded firearms in vehicles; a possessory only gun offense.

David Patch has been actively lobbying the legislature on firearms specific legislation that has nothing to do with the stated purpose of the Commission in R.S.A. 206:4-a, which includes: Establishment of positions on proposed legislation that affects fish, wildlife, and marine resources and the overall management of the fish and game department.

Furthermore, as per R.S.A. 206:4-a, the Commission is supposed to be “the citizens’ representatives, to be the stewards of the fish, wildlife, and marine resources of the state of New Hampshire…”

It’s clear that actively opposing bills such as SB 12 which was enacted into law on February 22, is not acting as the “citizens’ representative, to be the stewards of the fish wildlife and marine resources.”

Defeating the nomination of David Patch is a much-needed step in reforming the Fish and Game Commission.

Thank you for your consideration.