With a pro-Heller majority once again on the Supreme Court, please help GOA in its challenge to oppressive state laws that limit the right to carry concealed. You can do this by going here, and can read more about GOA’s concealed carry case before the Supreme Court.

And Then There Were Five

I’m sure that you’ve already heard the incredible news.

Once again, there are five Justices — supporting the pro-gun Heller decision — who will sit on the U.S. Supreme Court. 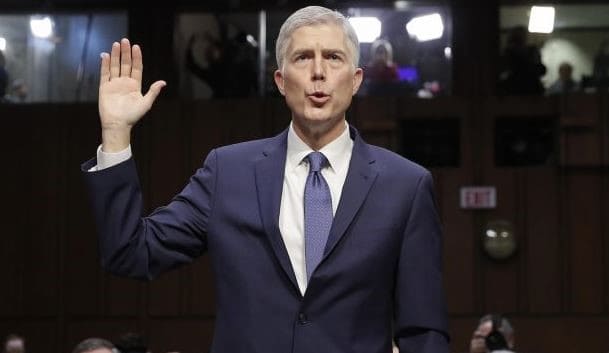 The Senate today, by a 54-45 vote, confirmed the nomination of Neil Gorsuch.  And with his ascension to the high court, the Second Amendment will once again regain a pro-gun majority.

Of course, the process was not without controversy. They say that those who love sausage shouldn’t watch it being made.

Well, the same is true for politics.  The Senate had to pull the trigger on the so-called nuclear option — forever destroying the use of the filibuster in stopping potentially dangerous judges.

Regardless, President Trump and Republican Senators kept their word to the American people in replacing Justice Antonin Scalia with someone in his likeness.

This is important from a Second Amendment perspective because there are several gun rights cases that are currently making their way through the court system.

One of those cases is headed to the Supreme Court and has GOA’s backing.

GOA’s amicus brief challenges the state’s restrictive “good cause” requirement for concealed carry licenses (as if defending yourself and family were not “good cause” enough).

In doing so, GOA argues that California’s laws clearly infringe the Second Amendment.

GOA’s brief also argues that the original challenge to the law interprets the Second Amendment too narrowly, attempting to appear reasonable to judges rather than relying on the robust constitutional text.

I want to thank you for taking action on the Gorsuch nomination.

It is always important to contact your elected officials on important issues.

If your Senators are pro-gun, they appreciate knowing that you stand behind them.  If they are anti-gun, it’s good for them to know that you will “remember in November.”

This is a good time to thank the President — and the Senators who voted “aye” — for putting a constitutionalist like Neil Gorsuch on the Supreme Court.

It’s also a good time to help Gun Owners of America in our work before the Supreme Court.

You can do so by contributing to GOA’s efforts in the Peruta concealed carry case here.

Thanks again for all your help.

P.S. Please distribute this good news alert to your pro-gun family and friends and urge them to take action. To renew your GOA membership or to join for the first time, please click here.