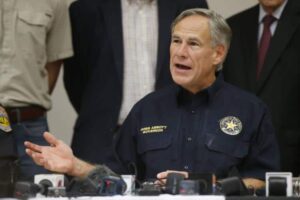 In the aftermath of the racially-motivated deadly mass shooting at an El Paso Walmart, Gov. Greg Abbott and top legislative leaders were resolute in their promise to “root out extremist ideologies,” address gun violence and help ease the grief of a suffering community.

“The state of Texas will not relent in its effort to help the El Paso community heal and keep all Texans safe,” Abbott said when he appointed a blue-ribbon task force dedicated to reducing violent crime.

But as El Paso and the rest of Texas looks back one year later on the Aug. 3, 2019, shooting that targeted Hispanics and left 23 dead and that many more wounded, civic leaders and advocates for reform worry that the twin challenges of coronavirus and economic hardship might sap the momentum of Abbott’s promise for action.

“My hope is that communities like El Paso, Midland, Sutherland Springs, Santa Fe and others (victimized by deadly gun violence) are not forgotten, and the people who were massacred on those days are not forgotten,” said state Rep. Cesar Blanco, an El Paso Democrat whose district includes the Walmart…

State Sen. Joan Huffman, a Houston Republican who chairs the special Senate panel, said when the panel was formed she would “leave no stone unturned” to find bipartisan solutions to gun violence and racially motivated violence while protecting gun rights for law-abiding Texans.

Even though the hearings were cut short, Huffman said in late July the panel will still develop a legislative package to address the issues.

“The committee will produce a public report that will include public safety-related recommendations for the next Legislature to consider,” Hoffman said, declining to spell out specific initiatives.

Any legislation that might be viewed as limiting gun rights for law-abiding Texans would face stiff resistance.

“If Texas wants to address mass attacks with policy solutions that actually increase public safety, we need to listen to the voice of grassroots gun owners and encourage more Texans to take personal responsibility for their own safety,” said Rachel Malone, director of the advocacy group, Gun Owners of America…