When does the mainstream media ignore a story where guns are used?

Gun Owners of America had the privilege of helping sponsor a free training event that was organized by Legally Armed in Detroit. 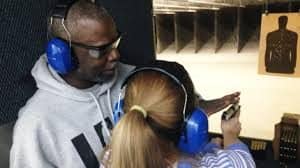 For an entire day this month, a group of volunteers trained more than 800 women in the responsible use of firearms — all for free. And every woman went home with a pink hat, courtesy of Gun Owners of America.
The founder of the event, Rick Ector, invited the local media to attend. He hounded them repeatedly prior to the event.

And while some media did run stories prior to the gun training, no media showed up at the range to get pictures or interviews. Many instead chose to write articles on the subject of Flower Day.

What a shame. Because Rick’s event was a tremendous success. The women who attended were shown how to safely handle and fire a gun. Plus, they were provided free handguns and ammunition to use, while shooting at targets with their own personal instructors.

Rick addressed the trainees and explained why he had such a passion to provide this free event, which is now going on its eighth year.

It was prompted by a woman that he had read about in the news — a woman who was brutally murdered and thrown into a dumpster. Rick decided, then and there, that he wanted to empower women throughout the city to protect themselves.

A certified instructor, Rick set out to train as many women as he could so their names would not be printed in the papers in such a horrific manner.

I also addressed the women and reassured them how a gun can make all the difference in the world.

I told them the story of Catherine Latta, a North Carolina woman who survived a brutal attacker because she was armed.

Catherine was assaulted and raped by a former boyfriend. She tried to immediately purchase a gun after that horrifying experience but was told that she would have to wait two to four weeks during the permitting process.

She told the clerk, “I will be dead by then.”

So, as she explains it, she went to the bad part of town to buy an illegal handgun on the street. She returned home that day armed with a handgun.

And good thing she was. Her tormentor returned five hours later for “round two.” But she was ready this time and shot him dead.

At this point in the story, smiles formed on the faces of the women in that Detroit audience. They were pleased to hear how a firearm could potentially make such a dramatic difference in their lives.

What Rick has done is truly an amazing undertaking, and he hopes that instructors in other cities will catch the same vision.

He would love to see an individual or group organize free training events in cities around the country.

“I see [these women] after their respective shooting experiences and I see confirmation of what I promised them — nobody leaves the gun range without smiling. That exact moment is priceless,” he said.

Lest anyone be deceived, pulling off an event like this takes a lot of work, and from a lot of people.

Top Gun Shooting Sports donated the use of their lanes all day, for free. The instructors — all 60 of them (both male and female) — gave of their time and didn’t charge a penny.

Local gun groups and ammunition makers donated ammunition. Even the weapons — the Glock 19s and Smith and Wesson M&P Shields — were donated, as well.

Alma Perez is a veteran of Rick’s free training. She took the course several years ago after her home was broken into.

“I looked at the silver bat that I had in my closet,” she said. “And I thought, ‘Had I been here and attempted to use that to defend myself, I wouldn’t have been safe.’”

Thanks to Rick Ector of Detroit, Alama has been trained, and she now has a gun to implement that training.

Yes, it’s a lot of work to pull off one of these events. But it’s well worth the effort.

Rick Ector is a shining example of how a successful gun training day can be pulled off as a charitable effort. Hopefully, we will see more events like this crop up around the country.