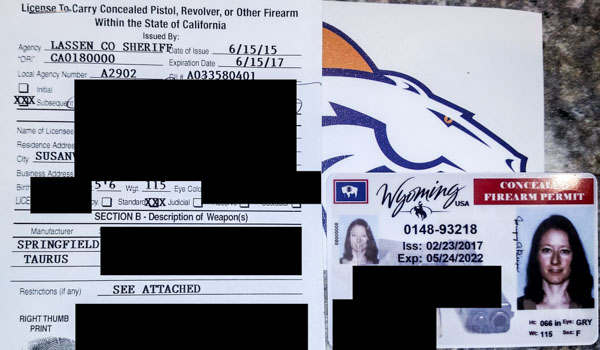 I wasn’t in the best of shape when I got the call. I had the flu, but when the Sheriff’s department for my county in Wyoming called me, I’d at least recovered my voice enough to answer. My concealed carry permit was available for pickup.

Why pickup? A quick Google search revealed that Wyoming makes you sign for your permit to prove you’ve received it. Anyway, I noticed something immediately when comparing my new Wyoming permit to my now voided California permit.

It’s a card, not a piece of paper with the laws stapled to the back. I was once told that the state of California gives out paper permits so they can easily destroy them when the right to keep and bear arms finally deteriorates in its entirety in the Golden State. Apocryphal perhaps, but scarily believable.

I wasn’t happy I had to get a permit to carry a firearms, to beg permission from the state of Wyoming to exercise my natural, civil and Constitutionally protected right to keep and bear arms. Sure, getting a permit in Wyoming was easier and cheaper than it was in California, but does that make it OK?

The Second Amendment’s prohibition against government infringement on my gun rights is easy enough to understand. “Shall not be infringed” is plain language, even if you’re not a constitutionalist.

Nonetheless, my Wyoming permit doesn’t make me list the guns I wanted to carry or spend a whole weekend “qualifying” with said guns. I can carry what I want.

And I want to carry in my native state of Colorado, too. I still have a lot of family there, and after getting a barrage of God-awful information regarding the laws in that state, I decided a Wyoming gun permit was a necessary evil. (Colorado has reciprocity wth Wyoming).

The whole permitting process is deeply infuriating. I had to beg the government for permission to carry a gun — to exercise a civil right — so I can protect myself and my children, rather than go unarmed.

Read more at The Truth about guns