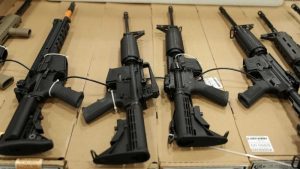 A bill being pushed by Democrats in the Virginia legislature would make it a Class 1 misdemeanor to carry, buy, sell, import or transfer firearm magazines that can hold more than 10 rounds of ammunition. House Delegate Kathy Tran (D-Va.) is the primary sponsor of the legislation, and she also supports a ban on semi-automatic rifles, such as the AR-15.

In the November election, Democrats won control over the Virginia House and Senate, which they will assume in January; Ralph Northam, a liberal Democrat, is the governor of Virginia…

“Tran pushes for universal background checks to close the loopholes for sales of firearms at gun shows and over the Internet, and fights to restore Virginia’s ‘One-Handgun-a-Month’ rule to combat gun-running,” states her official website…

However, pro-gun groups, say measures like this will make citizens less safe, and believe that people in the United States need weapons with high magazine capacity to protect themselves.

“A magazine ban is unconstitutional, according to the U.S. and state constitutions,” Erich Pratt, senior vice president of Gun Owners of America said. “It will not keep criminals from acquiring them, but it will make citizens less safe.”