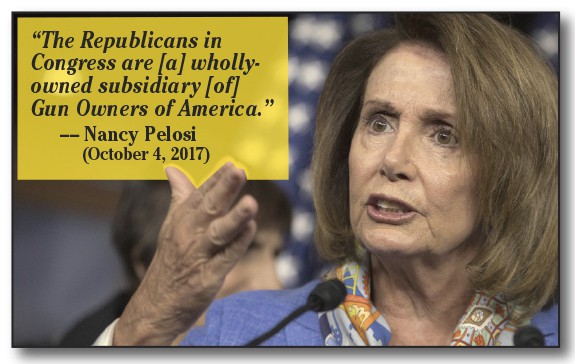 Rep. Pelosi’s statement (see accompanying picture) is reminiscent of what former Senate Minority Leader Harry Reid had to say about GOA members last year: “Senate Republicans continue to cower [before] the Gun Owners of America… GOA is even worse than bad.” 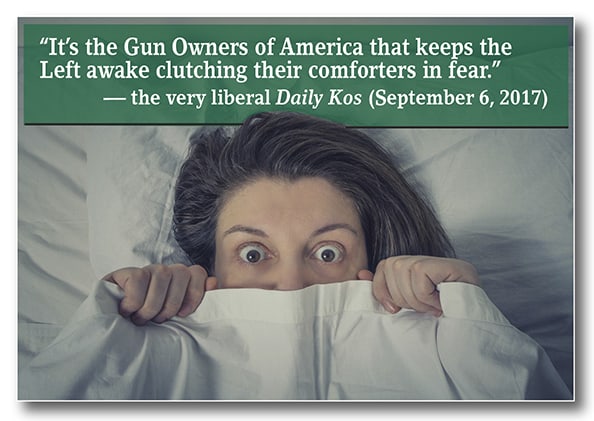 Striking fear into the anti-gun Left

It’s not just the liberal Daily Kos that fears the members of Gun Owners of America. The extremely anti-gun Senator Robert Torricelli of New Jersey (ret.) had this to say to a MSNBC audience in October: “If you are sitting at home and you are contributing to Gun Owners of America… stop giving!” 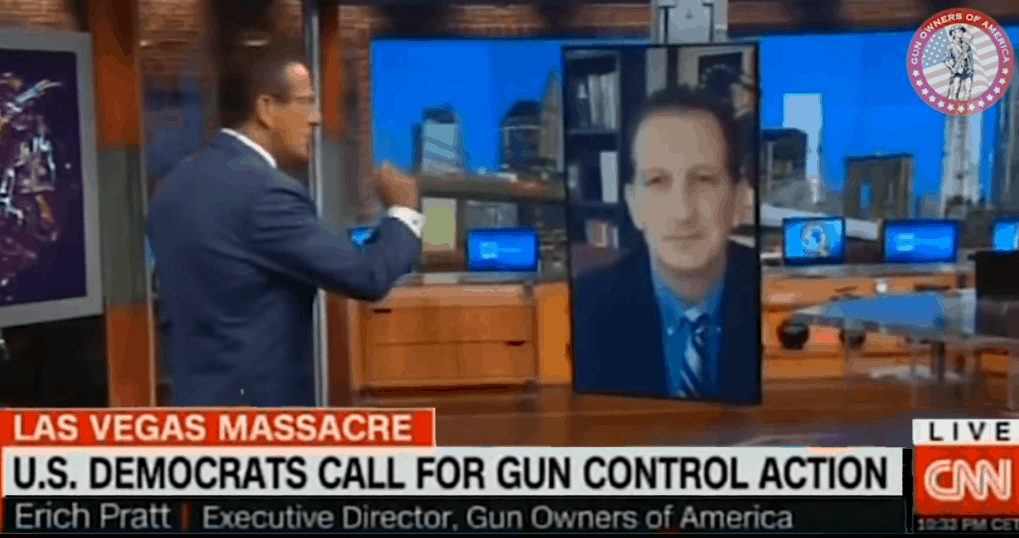 The Truth About Guns awarded GOA Executive Director Erich Pratt with “Gun Hero of the Day” in October. This came after a fierce gun control debate with a CNN host in the aftermath of the Las Vegas shooting. Many viewers said they joined GOA after watching the debate. Other viewers said the CNN host was “dominated,” “trounced” and “destroyed” by Pratt. 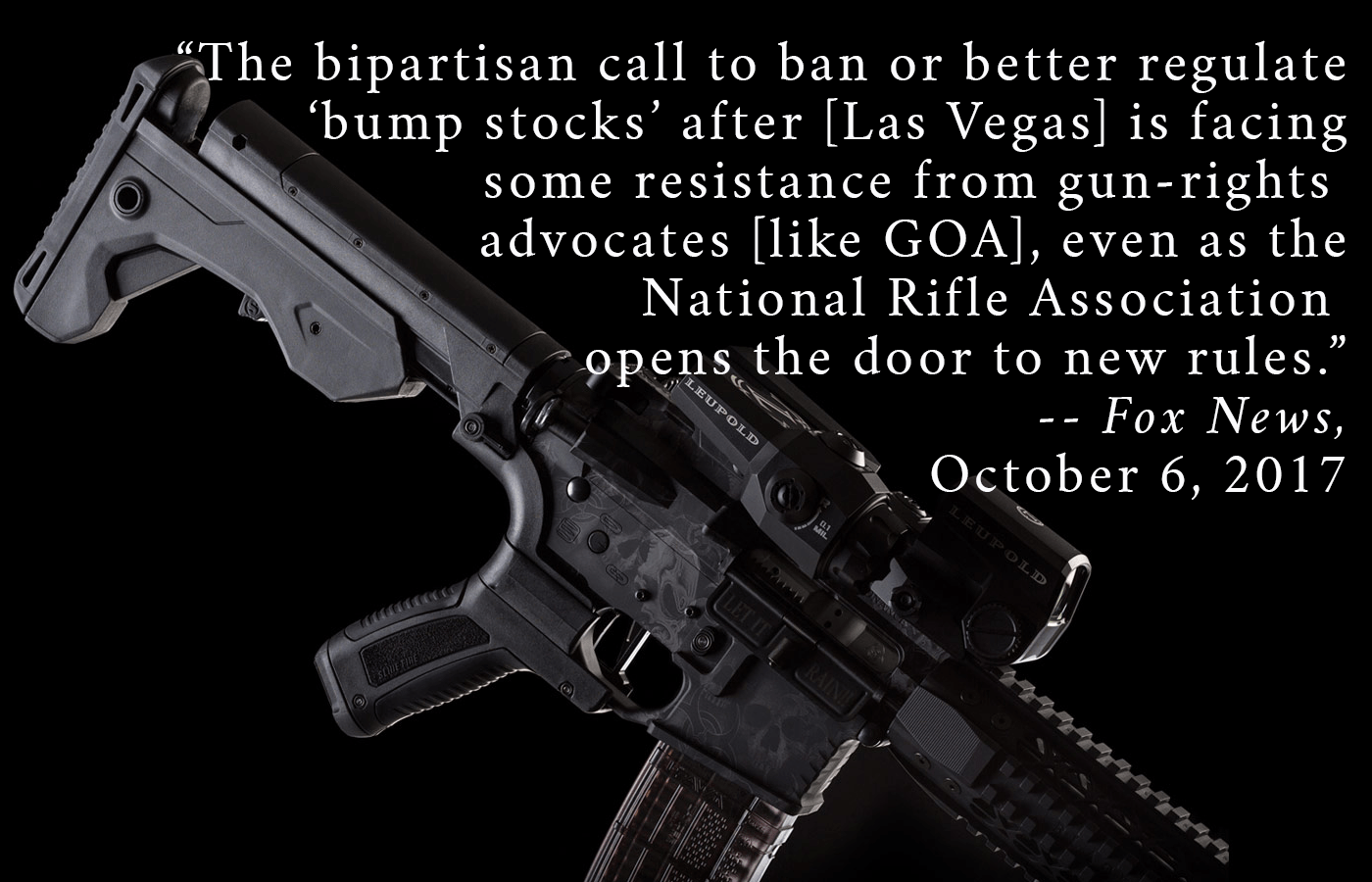 Stopping the rush for gun control

GOA stood its ground and rejected all forms of gun control in the immediate aftermath of the Las Vegas shooting.  Gun owners can read several articles on GOA’s website showing how efforts to ban bump stocks would inevitably ban detachable magazines and various gun parts. 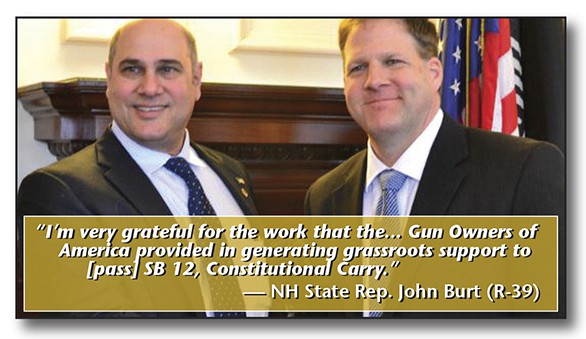 GOA worked hard in North Dakota and New Hampshire to get permitless carry passed and signed into law. Pictured here is GOA Life Member Alan Rice, who represents GOA in New Hampshire, with Gov. Chris Sununu (right) after he signed Constitutional Carry into law in February. 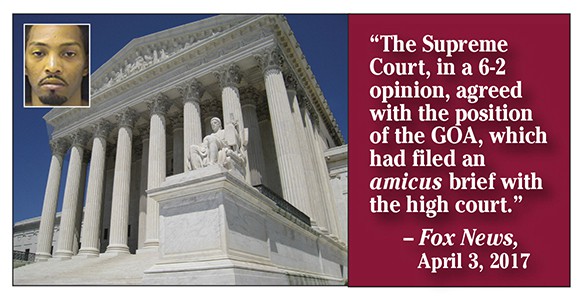 GOA Victorious Before the Supreme Court

GOA successfully supported Elijah Manuel (see inset) against “unreasonable searches and seizures” earlier this year. It has long been GOA’s contention that gun owners stand to be among the first to be targeted by government officials if our Fourth Amendment rights continue to be eroded ––hence the reason GOA has fought to bolster this freedom through legal action in the courts.

GOA brought Shaneen Allen to Capitol Hill on several occasions this year to lobby the Congress in favor of concealed carry reciprocity.  Shaneen, who is a permit holder from Pennsylvania, was incarcerated for carrying a concealed firearm into New Jersey ––a state that does not grant reciprocity.  Pictured with Shaneen is GOA’s John Velleco on the left and pro-gun Rep. Louie Gohmert (R-TX) on the right. 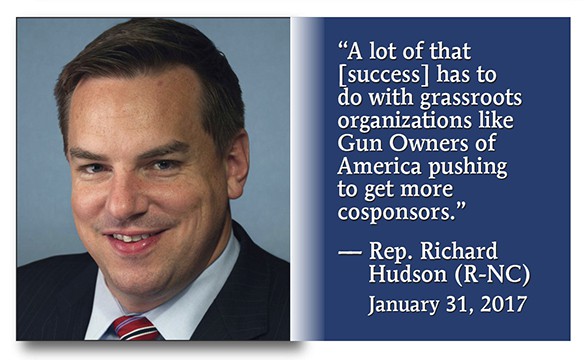 Pushing Concealed Carry Reciprocity in the Halls of Congress

Rep. Richard Hudson, sponsor of the concealed carry reciprocity bill in the House, praised GOA members for their successful efforts in getting cosponsors for H.R. 38. 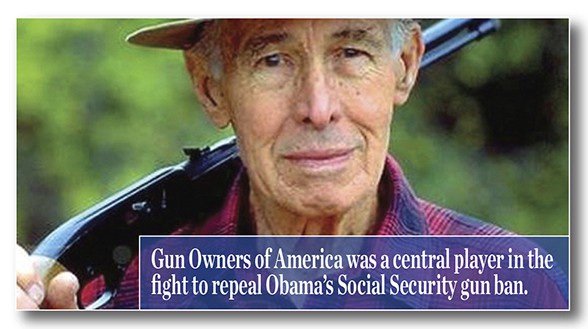 GOA helped push a repeal of the Social Security gun ban onto Trump’s desk, where he signed the bill in late February. 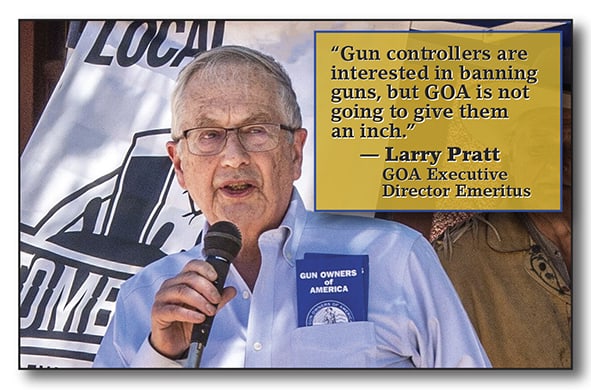 The town famous for the 1881 gun fight at the O.K. Corral (Tombstone, Arizona) declared that July 1, 2017, will be forever known as “Larry Pratt Day.” Tombstone’s proclamation recognizes Larry Pratt for “his long-time support” of the Second Amendment.