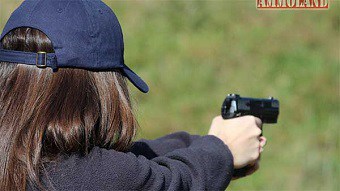 Here is some news you won’t find in the mainstream media. Again this week, responsible gun owners defend themselves and the people they love.

Self-defense instructor Robyn Street joins the Self Defense Gun Stories Podcast to look at three new examples. Were these gun owners lucky, or were they trained and prepared?   What can we learn from their experience? Listen and find out. (17 minute podcast)

All three victims survived lethal attacks because they had a gun.

First story-  Are you armed when you’re out to eat with your family?

You and your family are eating at Popeye’s Chicken. Actually, you’re waiting for two of your children to finish washing their hands in the bathroom. It is after 8 in the evening when a man walks up to the cash register and demands money. He is wearing a mask. Now you realize that the store is being robbed. The employees run out the back of the store. The robber turns to you as you and your family. You ask if you can leave. He says no. He demands your money. Then the robber waves his gun at you and your children. The robber looks back at the cash register for a moment. You present your handgun and shoot the masked robber several times. You and your family run from the restaurant. You can barely talk and someone else calls police for you.

Second story- Are you armed as you deliver pizza?

You are delivering a pizza late at night. It is dark. You get out of your car and walk up to the address with pizza boxes in hand.  Two men run from around the building. One of them has a gun. You raise your hands and one of them hits you on the head with his gun. You run to your car. The two attackers start shooting at you. Now you’re behind your car. You draw your pistol and shoot back. The robbers run. You drive away and call police.