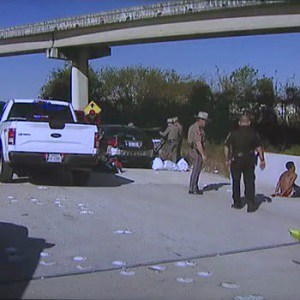 These cases only involve instances where a civilian who is legally carrying a concealed handgun in public stops a criminal.

. . . On Sunday around 9:15 a.m., Vidor Police were notified that the Louisiana State Patrol was chasing a Black Acura at speeds over 100 miles per hour.

The Vidor Police Department says 22-year-old Diego Gomez tried stealing a second vehicle after stop sticks took out his car near the 855B off ramp.

Jami Alford was in the passenger seat when the suspect tried to steal their truck.

“We started seeing this black Acura coming towards us and it was smoking really bad,” Alford said.

Alford says she was frightened during the incident.