This is how Gun Owners of America responded to the Vegas shooting that killed 59 people, injured 500+ others 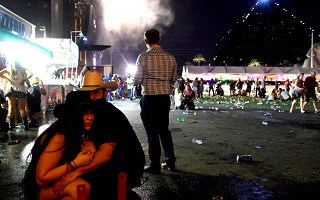 Gun Owners of American, a nonprofit lobbying organization formed in 1975 to preserve and defend the Second Amendment rights of gun owners, released a statement yesterday in the wake of the largest mass shooting in modern U.S. history.

A gunman killed at least 59 people and injured hundreds of others as he rained down bullets on a country music festival using automatic weapons from a Mandalay Bay hotel room.

This is what the GOA said:

“Everyone at Gun Owners of America was extremely troubled and saddened to see the tragic and terrifying report of the shooting in Las Vegas. GOA and all our employees send their sincerest prayers to the victims, their families, and all involved in this heartbreaking incident.

“Nonetheless, it is disturbing to see anti-gun politicians and celebrities politicizing the tragedy by calling for further restrictions on guns.

“We cannot blame gun owners, the gun itself, or the liberties protected in the Second Amendment for how evil people abuse that freedom.

“The vast majority of gun owners handle their firearms responsibly. Guns are used up to 100 times more often to save a life than take life (according to Obama’s Center for Disease Control in 2013). Even so-called ‘assault weapons’ are used in self-defense. Consider the Texan homeowner who successfully used an AR-15 to defend himself against a drive-by attack involving three shooters.

“Furthermore, terrorists and evil doers use other instruments, such as trucks, to take lives as shown in the tragic attack in Nice, France, where 86 people lost their lives.

“Again, GOA is heartbroken over this tragedy and our deepest sympathies go to out to all involved.”

The Passionate Non-Sequiturs of the Gun Debate