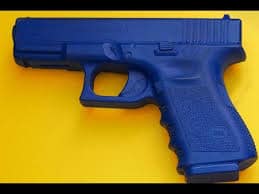 In the late 1980s, the Senate’s leading gun control advocate was Howard Metzenbaum (D-Ohio). In the November 1986 elections, Democrats won control of the U.S. Senate, and Joe Biden (D-Del.) would be the new Chair of the Senate Judiciary Committee. The party change much improved the prospects for gun control bills getting a committee hearing and a floor vote.

In February 1987 Sen. Metzenbaum introduced legislation to outlaw all guns that contained less than 8.5 ounces of steel, because such guns could supposedly pass through metal detectors easily. (The original bill can be found in the Feb. 4, 1987, Congressional Record, at page S1792. The Library of Congress’ Thomas website does not have full texts of bills from this period.) The original Metzenbaum bill would have allowed grandfathered owners to retain possession, but not to sell or transfer them. So upon the demise of a grandfathered owner, the heirs would immediately become illegal possessors of contraband.

The Metzenbaum bill did not ban the Glock, which contains 19 ounces of steel. The Glock was winning adoptions by law enforcement at a rapidly increasing rate. It was no longer plausible to claim that these law enforcement handguns were “terrorist specials.”

Instead, the Metzenbaum bill banned many small handguns. Again, the BATF had testified that these too were readily detectable. According to the NRA (American Rifleman, Jan. 1988), the Metzenbaum bill covered many derringers (up to .38 caliber) as well as .22 or .25 caliber handguns from companies including Beretta, Colt, North American Arms, Raven Arms, Rossi, Smith & Wesson, Stevens, and Walther.

The bill’s use of “steel” rather than “metal” for the minimum weight made a big difference. Many guns use zinc or aluminum in alloys. The thirteen ounce .25 caliber Raven pistol was made with zinc alloy, and had only 3.2 ounces of pure steel. Similarly, the Beretta 950 weighed over nine ounces, but the frame was aluminimum alloy, so the gun’s steel weight was less than 8 1/2 ounces. Small handguns had long been a target of the gun control lobbies. The lobbies had been unable to prohibit such guns nationally by calling them “Saturday Night Specials.” Now, small handguns were again set for prohibition–supposedly because they had something to do with the fuss about “plastic guns.”
Other handguns, including historic models, had frames made from iron, brass, bronze, rather from steel. They too were set for prohibition….

Given the apparent imperative to “do something,” pro-rights legislators had introduced alternative legislation. House Majority Leader Thomas Foley (D-Spokane) introduced H.R. 4014, the Firearms Detection Act of 1988. It garnered 95 cosponsors, most notably Rep. John Dingell (D-Ann Arbor), who was a member of the NRA Board of Directors. In the Senate, similar legislation came from Sen. James McClure (R-Idaho), who had been the lead Senate sponsor for the Firearms Owners Protection Act of 1986, a major reform of federal gun control laws.

What resulted was a compromise, the Undetectable Firearms Act of 1988, H.R. 4445. Its sponsor was William Hughes (D-N.J.), chair of the House Subcommittee on Crime, and a leading gun control advocate. Hughes was willing to negotiate, and produced a bill that won unanimous support from the House Judiciary Committee and NRA endorsement.

The minimum steel weight was reduced to 3.7 ounces, which must be in the general shape of a handgun. Language that arguably would have given the Secretary of the Treasury gun-banning discretion was removed. Industry research on prototypes was protected. As enacted, the bill banned no firearm that had ever been made, including the Glock. The Act is codified at 18 U.S. Code section 922(p)….

Consequences of the 1986-88 plastic gun debate and its aftermath

Massachusetts Democratic Senator Edward Kennedy, a strong anti-gun advocate, had remarked that the “plastic gun” issue was an opportunity “to get the debate on handgun control back on the right track.” Indeed, the gun control lobbies in 1988 got to tell their members, correctly, that the lobbies had actually pushed a bill into law. The Act was the first time that Congress had actually voted to ban a type of gun—albeit a type that did not exist and had never existed.

The 1988 Act helped set the stage for the 1994 Congressional ban on “assault weapons.” Conceptually, the 1988 and 1994 bills were very different. Yet the gun control lobbies were prescient that voting to ban things that don’t exist can be a gateway to banning things that do.