It was standing room only Wednesday when over sixty citizens presented a resolution to the Commissioner’s Court to declare Presidio County a Second Amendment sanctuary county. 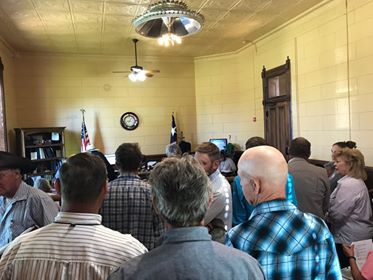 The crowd, which spilled over into the hallway, waited quietly for over an hour while commissioners worked through the agenda.  Six individuals spoke in favor of the resolution with no one opposing.  When the last person spoke, he asked for a show of hands in the room of all who supported the resolution.  Hands of all present were raised and shouts of “Hear, hear!” were heard.

Some of those speaking were rancher’s wives who told of instances where they had encountered illegal aliens on their property and that without a weapon, they would have not been able to protect themselves should the need have presented itself.  In this sparsely populated part of Texas, it can take law enforcement 45 minutes to an hour to reach the vicinity of a 911 call.

Others spoke about the overreach that they are seeing from the Federal Government and voiced their belief that they have a constitutional right to protect themselves and that the court needed to stand up and show support for these rights.

The local sheriff addressed the court and the crowd and pledged his support to the citizens of Presidio county and their constitutional right to keep and bear arms above any law that might be issued.

After the resolution was presented, the commissioners discussed the resolution among themselves.  It seemed at one point that it might be tabled due to some sections contained in the resolution that made some commissioners feel as if they would be violating their oath of office if they voted in favor of the agenda item.  After consulting with the county attorney, revisions were made that all, including the citizens, could support.  All commissioners present voiced their solid support for the Second Amendment and their belief in the need to protect it.

When a vote was called on the resolution, all three commissioners who were present and the judge voted in favor of the resolution.

The resolution was the brainchild of several conservative citizens who worked together with the Democrat Commissioner’s Court to ensure its passage.

Presidio County’s resolution recognizing a political subdivision as a Second Amendment Sanctuary follows in the footsteps of approximately 200 other political entities scattered across the nation that have filed the same type of resolution.

The language of the resolution is as follows:

Whereas, the Constitution of the United States is the supreme law of our nation, and

The Second Amendment to the Constitution states “A well-regulated militia being necessary to the security of a free State, the right of the people to keep and bear arms shall not be infringed.”, and

The U.S. Supreme Court found in Miranda v. Arizona (1966) that “Where rights secured by the Constitution are involved, there can be no rule making or legislation which would abrogate them.”, and

The U. S. Supreme Court in the District of Columbia v. Heller (2008) decision affirmed that the Second Amendment right to keep and bear arms is not connected in any way to service in a militia, and

The U.S. Supreme Court in United States v. Miller (1939) stated that firearms that are part of ordinary military equipment with use that could contribute to the common defense are protected by the Second Amendment, and

The Fourteenth Amendment to the Constitution states “No State shall make or enforce any law which shall abridge the privileges or immunities of citizens of the United States; nor shall any State deprive any person of life, liberty, or property, without due process of law; nor deny to any person within its jurisdiction the equal protection of the laws.”, and

The U.S. Supreme Court in the McDonald v. City of Chicago (2010) decision affirmed that a person’s Second Amendment rights to “keep and bear arms” is further secured by the “due process” and the “privileges and immunities” clauses of the Fourteenth Amendment. The decision also protects rights closely related to the Second Amendment, namely the right to manufacture, transfer, purchase, and sell firearms, accessories, and ammunition, and

The Texas Constitution, Article 1, Section 23 states “Every citizen shall have the right to keep and bear arms in the lawful defense of himself or the State”, and

Due to dual sovereignty structure of the Constitution, the Federal government has no authority to enforce state laws and States cannot be compelled to enforce federal laws, and

The last protectors of the U.S. Constitution are the County Sheriffs and “We The People of the United States of America” and our ability to fulfill that role successfully rests on our Second Amendment rights.

Any regulation that violates the Bill of Rights to the Constitution of the United States of America shall be regarded by the People of Presidio County to be unconstitutional, and therefore by necessity, unenforceable and invalid, furthermore

We, the People of Presidio County, Texas, through this resolution hereby declare our rights, our freedom and our liberty as guaranteed by the Constitution of the United States of America.

Teresa Beckmeyer is the Texas Director of Operations for Gun Owners of America.