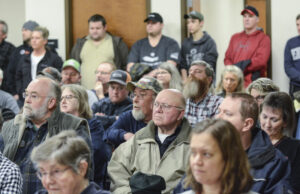 The ordinance rejects the enforcement of certain state or federal gun control laws and would restrict the use of local government resources to abide with the higher-government statutes.

By and large, supporters argued gun control measures restricting ownership for law-abiding citizens directly violates the right to bear arms granted by the Second Amendment of the U.S. Constitution.

“I support the Second Amendment,” was a refrain repeated often by the 100-person crowd’s majority.

“I am a firearm owner and fully support the Second Amendment as well as the reasoning behind the ordinance,” said Anne Sloan, a township resident…

The first Second Amendment Sanctuary Ordinance (SASO) as drafted by Gun Owners of America was passed last week in Buffalo Township, Union County, according to Val Finnell, Pennsylvania director of the advocacy group. Members of the Buffalo Township board attended Monday’s meeting.

Hundreds more communities nationwide have adopted SASO resolutions, which amounts to a symbolic gesture compared to the binding rules ordinances bring about.

“I was always beat (to a crime scene) by one or two people. One of those people was the victim,” Henninger said, adding that he was once backed up by an armed citizen and remains thankful for it…

Read more at the Daily Item

Does the ATF have a list of guns that you own?