With the Future of the Supreme Court at Stake, Ted Cruz is the Obvious Choice

“If conservatism is your bag, if conservatism is the dominating factor in how you vote, there is no other choice for you in this campaign than Ted Cruz.” — Rush Limbaugh, February 10, 2016.

With the death of Supreme Court Justice Antonin Scalia, the country is faced with two alternative futures.

A strong pro-gun replacement could, for the first time, begin to apply Heller and McDonald to overturn onerous federal and state gun restrictions. 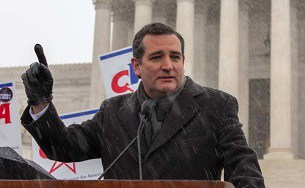 At the very least, New York’s comprehensive gun ban and registration scheme should be unconstitutional to virtually any thinking person.

But what about laws stripping veterans of all of their gun rights without due process?

Or what about efforts to copy 4473’s and create a national gun registry?

Or laws which ban entire classes of firearms, including, for instance, all post-1986 machine guns — even for people who undergo a comprehensive background check?

All of these can be successfully challenged if we get a pro-gun president like Ted Cruz — and a pro-gun nominee to replace Scalia.

If, on the other hand, we get a nominee who is a “blank slate” on Second Amendment and constitutional issues, the best we can hope for is that Heller and McDonald remain largely empty shells.

At worst, we could have a court which overturns Heller and McDonald by a 5-4 vote — and declares that NO ONE HAS AN INDIVIDUAL RIGHT TO OWN ANY GUN.

We know we would get a pro-gun stalwart from Ted Cruz.

What would we get from Donald Trump?

Well, Donald Trump said last year that his sister — who is a liberal federal judge on U.S. Third Circuit Court of Appeals — would make a great Supreme Court nominee.

Only after this comment began to be scrutinized, in the wake of Scalia’s death, did Trump start walking back that comment.

It because of this question mark that pro-gun activists — like Bob Owens of BearingArms.com — agree that Ted Cruz is THE CANDIDATE with a proven record:

“We’ll only get [a pro-gun] court with a Republican nominee with a proven record of being willing to fight for conservative principles and conservative nominees, not a lukewarm pretender who changes parties and positions to whatever he thinks is easiest to sell.”

Owens is right.  Ted Cruz has a solid record already when it comes to judicial matters and to fighting for our Second Amendment rights.

Cruz has argued nine cases before the U.S. Supreme Court, and he led 30 state attorneys general in opposing the D.C. gun ban back in 2008 — a case that gun rights supporters won before the Supreme Court.

We need someone who has always been on the right side of the fence.  After all, the next President could appoint three or four Supreme Court Justices.

We need someone like Ted Cruz to nominate people who, like Justice Antonin Scalia, have demonstrated a lifelong reverence for the Constitution and our God-given rights.

So please make sure you get out to vote tomorrow for Ted Cruz — and encourage your pro-gun family and friends to do so, as well!

Paid for by Gun Owners of America.