Former Mayor Michael “Big Gulp” Bloomberg is trying to buy another state — and this time the state is Washington.

The Bloomberg-backed proposal is I-594.  This initiative will be voted on in the November election, and it’s 18 pages long.  Eighteen pages!

So the only thing most Washingtonians will know about it is the lies Bloomberg is paying to spew over the airwaves. 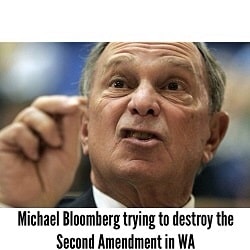 This, incidentally, even though the Brady Law was sold in the early 90’s as “the gun control which would stop crime and end the call for more gun control.”

The reality is that background checks are more of a burden to law-abiding citizens, than to criminals.  Consider that more than 175,000 military veterans have been denied firearms because of PTSD-related symptoms.

And researcher John Lott has reported that roughly 95% of gun buyers who are initially denied by the FBI are actually “false positives.”  It’s no wonder then that, as reported by the Department of Justice in 2012, the DOJ only prosecuted 44 criminals for illegally attempting to purchase a firearm — and only 13 were convicted!

Background checks have utterly failed to take criminals off the street, which is the ONLY way to keep guns out of their hands.

But then again, the name of the game isn’t safety. It’s exploiting the victims of horrible tragedies in order to score political gain.

Detroit and Baltimore have background checks, gun bans and gun registries — and yet both cities have murder rates that are amongst the highest in the nation.

But, if Bloomberg’s aim is not public safety, it’s making gun ownership such a trap-laden labyrinth that people throw up their hands and give up their guns.

After all, if Bloomberg has his way, one in sixteen law-abiding Washingtonians will be illegitimately banned from owning guns — for no justifiable reason.

The dirty little secret of the Brady system is that 6.2% of law-abiding gun purchasers — or one out of sixteen — are illegally prevented from buying firearms.

This is, in large part, because the Brady InstantCheck system seldom indicates that a purchaser is a “prohibited person.” But it frequently provides a non-committal “yellow light” which never changes to green or red — normally because the person’s name is similar to someone else’s.

Most gun dealers will not sell a gun subject to a “yellow light,” even if the law allows them to after three, ten, or sixty days.

And, while the FBI is legally required to correct these errors, more often than not, it simply tells the aggrieved party to “sue us” if unhappy with the erroneously imposed gun ban. Most people just give up — or they simply buy a gun from a private individual.

GET THE REST OF THE STORY.  These problems with I-594 are just the tip of the iceberg. You can read GOA’s entire Fact Sheet on I-594 — and get all of the sources and footnotes — at http://gunowners.org/fact9252014.htm

ACTION: Send this alert to everyone you know. Ask them to re-send it to everyone they know. Let every gun owner in Washington State — or friend of a gun owner — know that the Bloomberg initiative (I-594) must be defeated!