Today, anti-gun Attorney General Eric Holder announced that he will be resigning from his post as the nation’s top law enforcement officer. 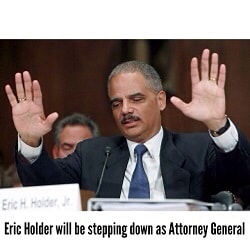 Holder successfully stonewalled and dodged answering questions of Rep. Darrell Issa (R-CA) and fellow House Oversight Committee members concerning Fast & Furious, the ATF’s botched gun running scheme which put weapons into gun smugglers’ hands in an effort to use the increased violence south of the border as a pretext for more gun control in this country.

Holder exhibited such disregard for the law that he was held in contempt of Congress in 2012 for withholding documents relating to Fast & Furious.

As you know, the failed operation directly led to the death of Brian Terry, an American citizen and Border Patrol officer. Holder has refused to take responsibility for Fast & Furious, and his resignation will be a way for him to quietly step out of the spotlight, and avoid being found officially guilty.

On a more cheerful note, Gun Owners of America commemorated Constitution Day this month by giving away a great “his and hers” set of handguns by Smith & Wesson.

You can watch the video here to see who the winner was!

Even if you didn’t win, GOA thanks you for your activism and your generosity to our work.

Stay tuned for future giveaways — but if you want to really get to the front of the line, then make sure you like GOA on Facebook, as this is where most of the gun giveaway alerts will appear!

Click here to support GOA’s efforts in defense of the Second Amendment.

California Woman Had Gun Held to Her Head by Armed Robber, but She Has a Surprise…