Measure would make criminals of most gun owners

Washington State is now less than a month away from the big vote on background checks.  The chief initiative is I-594 which, if enacted, will make it more difficult to purchase a gun from a private person.

For example, if you want to buy a firearm from your next door neighbor, both of you will have to take a day off of work and go to a gun dealer together.  (In some places in Washington, that may be a hundred miles.) The dealer will enter your name into the Instant Check system, as you pray that:

* The system isn’t down (as it frequently is); or

* You don’t get an unjustified “yellow light,” which happens to at least 1 in 16 gun buyers. 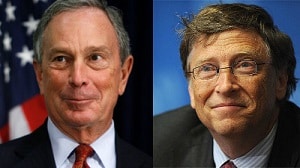 And incidentally, you will pay a $35-50 fee to the gun shop, in addition to the Washington State use tax.

I-594 is 18 pages long, so the only thing most Washingtonians will know about it are the lies that the rich, anti-gun billionaires are paying to spew over the airwaves.

Gun control supporters in the state have a war chest of $8 million, as multi-billionaires like Michael Bloomberg and Bill Gates have pumped enormous amounts of money in support of I-594.

On the other side of the fence, gun groups are firmly entrenched against this initiative — and are joined by the Washington State Law Enforcement Firearms Instructors Association (WSLEFIA) and the Washington Council of Police and Sheriffs (WACOPS).

For anyone who’s read all 18 pages, it’s no wonder that police oppose this measure.

I-594 will turn many police officers into criminals

Police who “transfer” guns to other police outside the scope of their authority will be criminals.

The law enforcement exception applies only to a person acting within the “course” of his official duties. [Section 3(4)(D).]

The prohibition on gun “transfers” without a background check will make criminals out of most adults learning how to use a gun — not to mention hunting parties and shooting competitions.

Unless you fall within an exception, the crazy initiative outlaws simply handing a gun to another person — an act which would make you a criminal. This is because section 2 (25) requires only two things for a “transfer”:   (1) “intended delivery” of a firearm, and (2) lack of compensation.  (“[D]elivery” is not defined.)

Even loony anti-gun states like California have broad exceptions to ameliorate the consequences of this broad language. In California, you can loan your gun for a hunting season — or for 30 days if you personally know the individual. You can hand your gun to someone during safety training.

Not so in Washington under the Bloomberg-Gates initiative. Indeed, the fact that I-594 creates “exceptions” which are ridiculously narrow probably makes the problem worse, under the legal principle that what is not explicitly excepted is implicitly outlawed.

* If your “hands-on” safety course occurs, in whole or in part, somewhere other than an “established shooting range,” you are a criminal. So’s your instructor. [Section 3(4)(f)(ii).]

* If you hand your hunting rifle to a non-hunter guide while climbing through thick brush, you are a criminal. So’s your guide. [Section 3(4)(f)(v).]

* If you show a friend your new gun at your home and let him hold it, you’re a criminal. So’s your friend. [Section 3 in general.]

Supporters of I-594 argue that these examples are “one-in-a-million hypotheticals.” But we at Gun Owners of America are the ones who hear from law-abiding gun owners every week — gun owners who are facing long prison sentences and who have had their lives ruined by anti-gun concoctions such as this.

ACTION: Send this alert to everyone you know. Ask them to re-send it to everyone they know. Let every gun owner in Washington State — or friend of a gun owner — know that the Bloomberg-Gates initiative (I-594) must be defeated!