Starting September 1st, some gun laws in Texas are slated to go into effect. 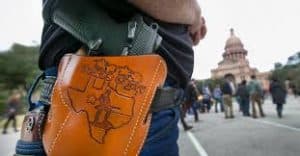 In just three weeks’ time, licensed gun owners will be allowed to carry handguns in places of worship and all places where it was previously illegal to carry unless otherwise noted or posted.

Second Amendment advocate Rachel Malone, who’s a Texas director for Gun Owners of America, said the law is aimed to clarify. “I think it’s stupid to prohibit carry, but they should absolutely have the right to prohibit that on their private property if they wish, and we as private citizens don’t have to go there if we don’t want to,” said Malone…

Malone believes law-abiding gun owners who work in schools should have the right to carry. “It’s helpful, I think. It somewhat expands the ability for schools to expand for safety,” said Malone on the law signed in the wake of Santa Fe. “I would much rather see more flexible policy that expands campus carry through K-12 schools.”

Also going into effect on September 1st, handgun owners can carry their concealed firearms without a permit for up to a week if a disaster has been declared. “The safest place for your gun is with you, it’s on you,” said Malone. “It’s actually not safe to have to disarm and leave your gun in your car or your home, someone could break in.”