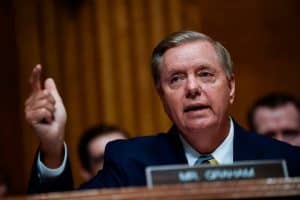 Graham announced he had reached a deal with Democratic Connecticut Sen. Richard Blumenthal to create a federal grant program to help states establish “red flag” laws, or laws that facilitate gun confiscation when a threat is detected, according to a statement.

“I have reached an agreement with Senator Blumenthal to create a federal grant program to assist and encourage states to adopt ‘Red Flag’ Protection Order laws to timely intervene in situations where there is an imminent threat of violence,” the South Carolina senator said.

Graham, the Senate Judiciary chairman, also indicated that his legislation has Trump’s support. “I spoke with the President this morning about this proposal and he seems very supportive,” he said…

“It is frustrating to see President Donald Trump’s continued support for so-called Red Flag laws. These Red Flag laws, properly known as Gun Confiscation Orders, are incompatible with actual due process and allow for the confiscation of firearms from innocent Americans,” Erich Pratt, Gun Owners of America vice president, told the DCNF.