Fresh calls for gun control following massacres in two U.S. cities over the weekend are testing the resilience of the National Rifle Association at a time when the nation’s largest gun lobby is riven by leadership clashes and allegations of reckless spending….

A handful of Republican lawmakers on Sunday endorsed stricter gun controls, but the GOP largely ignored Democratic demands that the Senate abandon its summer recess and return to Washington to address the issue. Senate Majority Leader Mitch McConnell (R-Ky.) has refused to consider restrictions the House passed in February, the first federal legislation of its kind since the late 1990s. 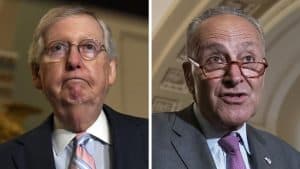 Although President Trump called for “strong background checks” on Twitter, in a national television address Monday he blamed “mental illness and hate” for the shootings. The only limits on gun sales he mentioned were “red-flag laws” that aim to identify mentally ill people who should not be allowed to buy firearms….

Blumenthal and Sen. Lindsey O. Graham (R-S.C.) are writing legislation that would offer federal grants and other incentives for states to pass legislation for emergency risk protection orders. Those statutes would allow family members, law enforcement officials and others to petition a judge to bar firearms from someone they believe is an imminent threat to themselves or others….

The group [is] promoting a discounted annual membership of $15. That’s significantly less than the NRA’s $45 fee, though the group is offering a discount to $30.