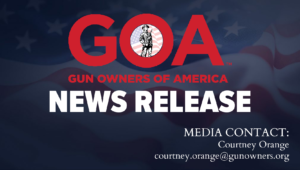 Gun Owners of America is encouraging American voters to remind Senator Joe Manchin (D-WV) of the promise that he made to the American people not too long ago.

“Currently, the future of the country is resting on whether Senator Joe Manchin keeps his word and votes against any effort to modify or eliminate the legislative filibuster,” said GOA Senior Vice President Erich Pratt. “The reason that we have been so successful in defeating gun control over the past decade is because of the Senate filibuster. But now, Democrats are threatening to nix it.”

In an apocalyptic environment where the filibuster has been eradicated, Americans could expect to see a Democrat Congress ramming through gun bans, gun owner registration and more. And to make sure that everything they do is ruled “legal,” anti-gun Democrats have threatened to pack the U.S. Supreme Court.

GOA issued an West Virginia alert today which points out that if Schumer promises Manchin a key committee chairmanship or financial support for his next election in exchange for his promise to kill the filibuster, Manchin could be swayed.

“This is why it’s imperative that Manchin hears from voters,” Pratt said. “People are going to have to remind him regularly and often that they will be closely watching what he does.”

The preservation of our gun rights could depend on whether people take action and contact Sen Manchin. Click here to view the full alert.