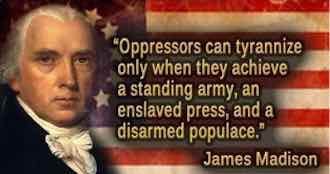 Weapons change, but the man who uses them changes not at all.”—Gen. George S. Patton

It seems that a segment of the shooting population pines for the old times, and actually believes things were better way back when. Guns were in .30 cal and .45 ACP, the uniforms were pressed to a razor’s edge, and Mitsubishi was a thing only known for being shot out of the sky. Back when the ships were made of wood, and the men were made of iron. But the truth is, weapons evolve. And you either get with that evolution, or you go extinct. To borrow a quote from my favorite humor website Cracked.com, showing up to fight iron age enemies with bronze age weapons, you might as well have been carrying a breadstick. GUNS AMERICA

The prevailing thought on the gun control political left is that times have changed but technology has no reason to. That is, while a man had the right to defend himself using a single shot musket in 1791 against an attacker using a single shot musket, a man in 2017 using a five shot revolver has no right to defend himself against a perp with a 30 shot semiauto AR. Or a variant: the home owner with a 30-round AR has no right to use his repeating firearm against four attackers using a 10 shot semiauto pistol, a crowbar, a butcher knife, or a runaway truck. For the left, self-defense is unfair to begin with, and for all self-defense cases the left has a pat answer: The Founders Never Gave Americans the Right.

For the left. equality is everything. Self-defense by its nature discriminates against the attacker who may not be as well-armed. What they would prefer is for the perp to have the 30 shot AR, and for the home defender to have a replica single shot musket, or better yet, an Obamaphone with which they can call 911.

As you can see in the linked video, the victim has plenty of time to make the call. And wait for the police to show up. And too, that a single shot firearm would have sufficed.

As in all things, the left takes a logical point illogically to its logical conclusion: meaning that in the 18th century when the Bill of rights were composed, man used mostly muzzle-loading single shot muskets. When the founding Fathers wrote the constitution, the gun controller will posit, they never had in mind repeating firearms for use by civilians

For decades the federal judiciary has been trying to interpret the Second Amendment out of the Constitution. It is, as Sanford Levinson has termed it, an “embarrassment” to an elite class of legal scholars that finds firearms to be unusual and repulsive objects. Now the 4th U.S. Circuit Court of Appeals has declared that the semi-automatic AR-15 rifle is not covered by the Second Amendment, despite that fact that is the most common rifle sold in the United States. This execrable decision is the latest outrage in a long series of disingenuous judicial contortions.

The courts have never come to terms with the fact that any intelligible reading of the Second Amendment requires an interpretation that acknowledges and reconciles its two clauses. The operative clause speaks of the “right of the people,” while the prefatory clause justifies the operative clause by professing that a “well regulated militia” is “necessary to the security of a free state.”

Prior to the Heller decision by the Supreme Court (2008), for 60 years or more the federal judiciary almost unanimously ruled that the Second Amendment did not guarantee an individual right. The militia mentioned in the prefatory clause was taken to be the National Guard. Thus, the right described in the operative clause was interpreted to be the right of states to maintain militia. This interpretation was never credible because it excised the Second Amendment from its contextual and historical underpinnings.