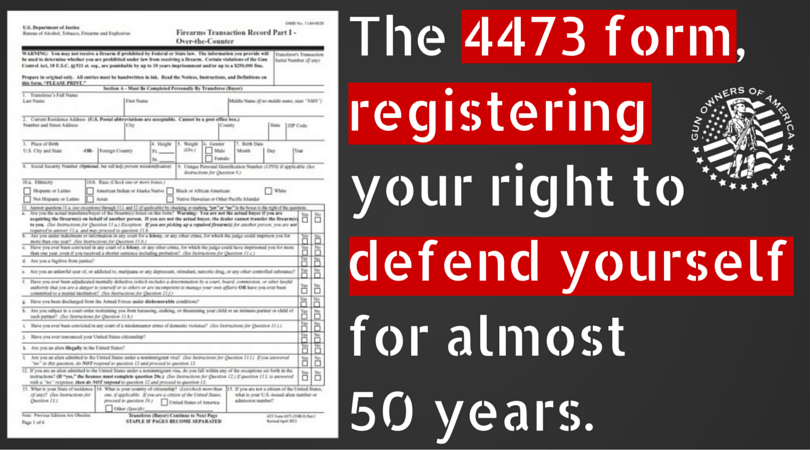 Gun owners’ opposition to background checks is probably the most difficult position for non-owners (and even some owners) to fathom.

They’re supposed to prevent “people who shouldn’t have them” from getting their hands on guns – or at least that’s what we’re told.

But the objection isn’t about what they’re supposed to do, it’s the fact that they have been used to deny an increasing number of people their second amendment rights, long after the headlines over their passages fade.

They’ve not only been used to deny purchases, they’ve been used to force the surrender of arms that had  been legal for decades, only to be reclassified long after the purchase and with no wrongdoing by the owners.

Often, this devolves into pro-gun rights activists chanting “registration is confiscation” while anti-rights activists respond with cries of, “Paranoid gun nuts!”  What we hope to accomplish in this piece is to explain the mechanics of how a background check works, what becomes of that information, and how it has come back to harm those who go through the process.

[Editor’s Note:  Gun Owners of America has documented the myriad of abuses in the background check system — how they are ineffective, unconstitutional and dangerous.]

Objection One: Abuse of the System

The unique identifying record that ties a specific firearm to a specific individual is required by federal law to be destroyed after 24 hours.  However, not long after the system was implemented, it was found that the Department of Justice under then-Attorney General Janet Reno had been keeping such records for several months for “audit purposes.”  Since then, there has been a persistent, recurring effort to remove the retention limit from existing law.  In 2009, Senator Frank Lautenberg introduced SB 2820, which would allow the DoJ to keep those records “indefinitely.”  In 2013, Representative Barbara Lee introduced HR 661, which would also remove the requirement.

Of course, even when that transactional record is deleted, the information is available for twenty years – or longer – through ATF inspections and surrendered records.  While ATF agents are not legally allowed to copy or remove records unrelated to a specific investigation, incidents of this taking place are not uncommon.  In fact, a consulting group created to help FFLs stay in compliance with regulations specifically offers advice regarding how to behave when it occurs.  The advice, essentially, is that the agents should be allowed to do what they will, and the matter will be taken up in the courts later – after the records have been copied or removed.

The only thing preventing the existence of a decades-long (assuming laws are not amended to allow indefinite retention) federal record of individual and specific firearm ownership is private transactions taking place in states that do not require background checks.

This is what is meant by “background checks are registration.”…

New York City has witnessed just about every form of abuse, and will make for a good case study….

[I]n 1967, then-mayor John Lindsay signed into law a long gun (rifle or shotgun) registration ordinance passed by the New York City Council.  From that point forward, anyone seeking to possess any rifle or shotgun within the city limits merely had to register it by make, model and serial number to obtain a permit for legal ownership. The fee was set at very “reasonable and common sense” $3.  Gun owners were promised that registration rolls would never be used to confiscate the firearms of law-abiding citizens.  Bill sponsor City Councilman Theodore Weiss vowed that that the fee would never be raised, and that “the city would always bear the brunt of the real costs of administering the law.”

Immediately after passage of the law, Mayor Lindsay proposed amendments to increase the fee to $25.  As of this writing, the cost is approximately $230 ($140 for the application fee and $90 to process fingerprints).  So much for a politician’s promise.

Then, in 1991, Mayor David Dinkins signed a City Council bill banning the possession of many semi-automatic rifles, claiming they were a now considered “assault weapons,” a term recently defined but now codified in NYC Administrative code, S 10-303.1. The registration rolls established in 1967 – the same rolls that “would not be used to confiscate the firearms of law-abiding citizens” – were used to identify the owners of such arms, which had been legal just the day before.  Another promise broken.

2,340 citizens received letters demanding the forced sale or surrender of the guns.  A Staten Island man who announced his refusal to comply was the subject of a police raid. He was arrested, and his guns were seized.

In 2006, NYC Administrative code S 10-306 was added, outlawing any “ammunition feeding device greater than five rounds.”  This further reduced the number of formerly-legal rifles that could continue to be possessed, but no real enforcement effort was attempted until the passage of the statewide “SAFE Act” law in 2013.  Then, once again, the records that “would not be used to confiscate the firearms of law-abiding citizens” were consulted and “sell or surrender the guns we know you own” were sent out to New York City residents.

Guns were being confiscated – again – even if doors weren’t being kicked in.