“This is a fantastic day…. Law-abiding citizens should not have to ask for permission to exercise a constitutionally-protected right.” — GOA’s Erich Pratt, quoted in BreitbartNews.com, September 15, 2016

Not a GOA member yet?  You can join Gun Owners of America for only $20 and start getting postcards to put heat on your legislators today!

This has been a terrific week.

I am so proud of our Missouri activists, because in unison, they drowned out the shrill voice of billionaire Michael Bloomberg.

We now have 12 states that have adopted Constitutional Carry — Missouri becoming the latest one to do so on Wednesday. 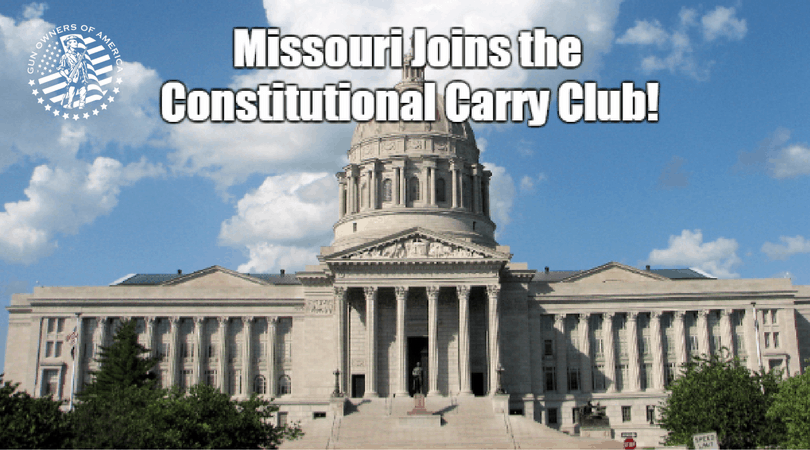 And for anyone who was watching … wow! … legislators in the Show Me State did it in grand fashion.

Concealed carry has made tremendous strides in 2016, as Missouri now becomes the fourth state this year to adopt a permitless carry law.

Gun Owners of America mobilized its grassroots members on several occasions in support of this Constitutional Carry legislation.

You can go here and here to see recent examples.

Billionaire Michael Bloomberg was very active in Missouri, opposing the legislation, but to no avail.

The loud, collective voice of gun owners across the state overcame Bloomberg’s money and his misrepresentations about concealed carry.

In Other Good News …

The postcards from GOA members are paying off!

In August, Gun Owners of America mailed postcards to its members urging Representatives to oppose “No Fly, No (Gun) Buy” legislation.

The problem with these bills is that law-abiding gun owners can be erroneously put on Government Watch lists — without due process — meaning their Second Amendment rights would be illegitimately denied or put on hold.

Well, these postcards are now inundating congressional offices, and they couldn’t have arrived at a better time. 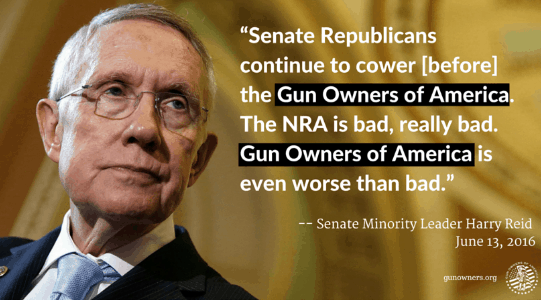 On Wednesday, Democrats tried to hijack the House floor to demand a vote on Government Watch list legislation.

But Republicans refused to grant unanimous consent, and shut down Democrats’ efforts at passing gun control … for now.

No doubt, anti-gun Democrats will keep trying. Remember that they already staged a sit-in on the House floor in June, demanding more gun restrictions.

And similar efforts were attempted in the Senate.

But Gun Owners of America fought hard to oppose ALL gun control, and garnered the ire of Senators like Harry Reid, who said at the time:

So please help us to continue deluging legislators’ desks with postcards:

One GOA member recently told me:  “I find the postcards you send out to be extremely useful.  When I receive extra ones, I stamp and give them to friends to sign and send.”

That can be you as well!

Keep in mind that membership in GOA is only $20 for a year — but with that membership, you will be supplied with a continual stream of postcards that you can use to put heat on your legislators.

You can join Gun Owners of America for only $20 and start getting postcards to put heat on your legislators today!

Finally, I want to make you aware of several different tools that you can use to help educate yourself and others on Second Amendment issues.

The first is a GOA production called Praesidium, which is a powerful short film that has elements of H.G. Wells’ Time Machine.

It’s short — only five minutes — but it delivers a powerful message in showing the dangers of Gun Free Zones.

The second video, also a GOA production, exposes the failures of Gun-Free Zones in just two-and-a-half minutes — explaining why mass shooters target these victim disarmament areas and showing how guns are being used in self-defense.

Click here to view The Lie Behind Gun Free Zones.

Lastly, another resource that shows the dangers of Gun-Free Zones — and gun control in general — is Dr. John Lott’s new book, The War on Guns: Arming Yourself Against Gun Control Lies.

Dr. Lott not only tackles the failure of Gun-Free Zones, but of background checks, Aussie gun control and much more.

You can order your copy today by clicking here.

I hope the above resources will help you and your family to better articulate Second Amendment principles with those who don’t understand the benefits of freedom.

Thank you so much for your support and activism in defense of our rights.