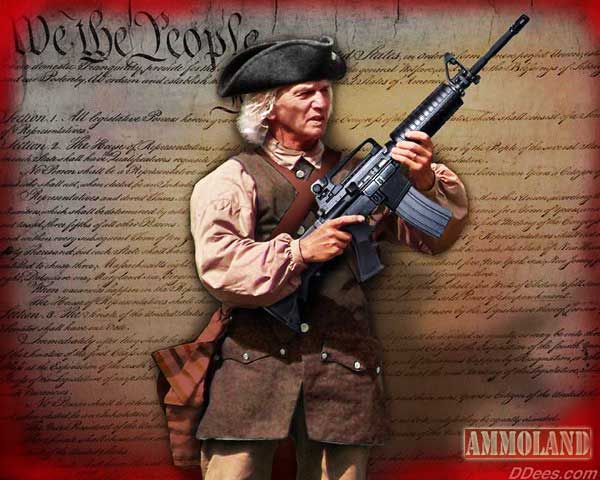 Sorry, Patriots— Federal judges say the Second Amendment only
protects the right of law-abiding citizens to possess non-dangerous
weapons for self-defense in the home.”

A panel for the United States Third Circuit Court of Appeals has affirmed a district court ruling and sided with the government against a man who was authorized by the Bureau of Alcohol, Tobacco, Firearms and Explosives to manufacture a post-1986 machine gun through a trust, only to have the permission rescinded and his property confiscated. In doing so, and by ignoring founding intent behind the Second Amendment, the panel ruled the right of Americans to own militia-suitable firearms can not only be infringed, but that it’s not even a right.

The case pits the Ryan S. Watson “Individually and as Trustee of the Watson Family Gun Trust” against the Department of Justice.

[Gun Owners of America — and its foundation, Gun Owners Foundation — has submitted an amicus brief in the Watson case.  The brief, and a summary of it, can be read here.]

The basis for attempting such a build after the ban on ban on civilian ownership of machine guns manufactured after 1986.was precipitated by ATF’s documented contention “the term ‘person’ in the [Gun Control Act of 1968] does not include an unincorporated trust [and] such a trust is not subject to the prohibition.” “Watson was given permission by [ATF] to make a machine gun by approving his ATF Form 5320.1 (‘Form 1’). Watson subsequently made the authorized machine gun,” the appeal brief explains. “BATFE later revoked the approved Form 1 and mandated that Watson surrender the machine gun, which he did under protest.”

The panel opinion provides a glimpse of the tortured legal reasoning an agenda- motivated court must go through to deny both the function of the militia as well as the clear proscription that “the right of the people to keep and bear arms shall not be infringed.”

“We reiterated that ‘[a]t its core, the Second Amendment protects the right of law-abiding citizens to possess non-dangerous weapons for self-defense in the home,’ and thus, under Heller, ‘restrictions on the possession of dangerous and unusual weapons are not constitutionally suspect because these weapons are outside the ambit of the amendment,’” the opinion states. “[G]overnments may restrict the possession of machine guns.”

If we’re to believe these elite vetted and confirmed top legal scholars, the Founders conceived of a militia system where members would take to the field — to engage professional soldiers equipped with military weaponry “in common use at the time” — bearing “non-dangerous weapons for self-defense in the home.”

“The Third Circuit’s opinion in Watson v Lynch made several errors,” Stamboulieh and Beck told AmmoLand in a joint statement. “First, it failed to look at the historical analysis we provided regarding what the phrase ‘dangerous and unusual’ actually means.

“[T]he Court was able to uphold the Hughes Amendment via a circular logic; arguing that the ban is constitutional because machine guns fall within a category invented by the court,” Beck and Stamboulieh explained. “In doing so, the Court could simply ignore the arguments we presented to it. We plan on seeking rehearing by the entire Third Circuit Court in the near future.”

Additionally, the attorneys filed an appeal in the Fifth Circuit Court for Hollis v Lynch, a case out of Texas that also involves an approved Form 1 machine gun on a trust after which ATF revoked the issued tax stamp, something they have no statutory authority to do. A quick distinction between the two cases is that in Hollis, ATF approved the Form 1, but he did not build a machine gun.

[GOA and GOF have also submitted an amicus brief in the Hollis case.  This brief, and a summary of it, can be read here.]