President Biden has announced that he will travel to New York City (embedded below) to meet with newly sworn-in Mayor Eric Adams to discuss the huge crime wave that is sweeping across New York and other parts of the country. 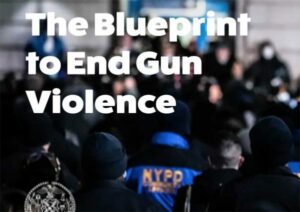 The discussions will no doubt include ideas on how to further restrict the Second, Fourth, and Fifth Amendment rights of law-abiding New Yorkers and visitors alike. In President Biden and Mayor Adams’ view of America, guns are the problem, not criminals. In their imaginary world, anyone who owns a firearm is a potential criminal.

These officials refuse to admit that New York State, and New York City, in particular, have some of the most severe restrictions on the right to keep and bear arms of any US jurisdiction. Anyone who wants to own a handgun is first required to obtain a license, then each handgun must be registered and listed on that license. And that is just to keep a gun at home. Having a full carry license requires the applicant to prove an unusual need for armed self-protection.

New York has defined “proper cause” so narrowly that few applicants can overcome the bureaucratic hurdles. A state resident, who is fortunate enough to have a full carry license, cannot exercise his or her right to carry in New York City, where self-defense guns are needed the most. Carrying in the City requires a special endorsement from the NYPD – which for most, is unobtainable. This issue is now before the US Supreme Court and GOA/GOF filed a brief in NYSRPA v. Bruen. Unlike many other states, there is no way for a non-resident to apply for a license. Rifles and shotguns that are not banned by name require another license.

Even with permits, licensing, and lists of prohibited guns, criminals will steal, lie, and cheat to obtain guns because they are well aware that New York’s laws have disarmed the law-abiding.

Mayor Adams recently announced, “The Blueprint to End Gun Violence,” which he calls a public health crisis. The Mayor’s plan includes “checkpoints” that are reminiscent of Soviet Russia or Nazi Germany in places where people enter the city. People and vehicles will be searched, and if firearms are found, they will be arrested.

The plan calls for Congressional action – or in other words: export New York’s failed gun laws to America.

Americans are free to travel to different states with firearms as long as their possession is legal at the origin of the journey and the destination. Let’s consider, for a moment, a Pennsylvania resident traveling by car to vacation in New Hampshire or Maine. Our hypothetical traveler might traverse the George Washington Bridge which will place them in danger of a warrantless search, possible arrest, and time in a New York City jail for perfectly lawful conduct. In Eric Adams’ New York, these Americans will be labeled as so-called “gun traffickers” and treated like common criminals.

These illegal searches and seizures allow the Adams Administration to claim their crackdown on guns is working. Then, when the violence doesn’t stop, they will inevitably call for greater and greater restrictions on the freedoms of the law-abiding. This is all going on against the backdrop of a city that is taking little to no action against true criminals. Mayor Adams and the NYPD are attempting to fool people into thinking there is a problem with the interstate movement of firearms and his crackdown is justified. This is not the case.

The NYPD is an agency known for massive civil liberties violations – breaking the law in the name of the law. As the originator of “stop and frisk” which targets people for illegal searches based on skin color, ethnic makeup, or even the clothes they are wearing — the modern NYPD more closely resembles the Soviet KGB than an American law-enforcement agency. Stop and frisk is a huge Fourth Amendment violation.

The City Of New York Has Gun-Hatred Ingrained In Its Very Fiber & Being.

In 2006, the city government hired private investigators to travel to Virginia and at least four other states to purchase firearms in a futile attempt to prove that New York is being supplied with guns from Virginia.

The reality is that the investigators engaged in criminal conduct because they violated several federal firearms laws.

Then, in a brazen display of arrogance, the city repeated the publicity stunt in 2009 after the US Department of Justice warned them that this was unlawful and could very well jeopardize legitimate criminal investigations. New York didn’t heed the warnings because they were and are motivated by hate for the Second Amendment rather than any motivation to end the self-created crime problem in New York. Most so-called “gun crimes” in New York are possessory in nature — and are not crimes in most of America.

The people who are arrested for “gun crimes” are, in many cases, otherwise law-abiding citizens who need a means of self-defense in a city that cannot protect them and won’t allow them to protect themselves. In the 1980s Bernhard Goetz felt the need to take responsibility for his own defense against violent criminals who were attacking him and was forced to fire in self-defense. For this, he was charged with several violent crimes. Goetz was acquitted of every charge other than carrying a self-defense gun in NYC without the proper government permission slip.

It is no accident that the states with the least restrictive firearms laws, New Hampshire, Maine, and Vermont are consistently ranked as three of the safest places to live, work and raise a family.

The real crime here is that President Biden and Vice President Harris want to duplicate New York gun laws across the county.

The question is will Congress go along with the scheme to make the rest of America more like the former Soviet Union and less American?