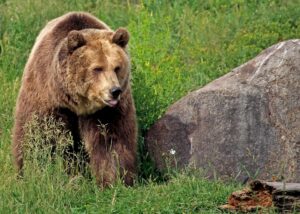 The Governors of Wyoming, Montana, and Idaho have asked the U.S. Fish and Wildlife Service (USFWS) to remove the Greater Yellowstone Ecosystem (GYE) population of grizzly bears from the Endangered Species List (ESL).

In a formal petition to the USFWS, Wyoming Governor Mark Gordon, with full written support from the states of Montana and Idaho, affirmed that grizzly bears, by all measures, have been fully recovered from “Threatened” status since 2003. All three state Fish and Wildlife Agencies also support ESL “Delisting.”

As you probably know, many opponents to “Delisting” are the same people who want to restrict your right to keep and bear arms and your right to hunt, and they ignore the fact that lethal grizzly control is now being implemented by taxpayer-funded government employees to maintain a balanced grizzly population and ensure public safety.

Current grizzly population estimates in the GYE demonstrate that over 1,000 grizzlies roam the three-state area, and this estimate far exceeds all federal and state scientific requirements for a recovered and viable population.

The states of Wyoming, Montana, and Idaho developed a tri-state Memorandum of Agreement (MOA) regarding the management and allocation of discretionary mortality of grizzlies in the GYE, and this MOA demonstrates that grizzly populations have expanded their range far beyond the edges of the bears’ biological and socially-acceptable range.

Grizzlies are now found 65 miles outside the Demographic Monitoring Area (DMA) established by the Federal Government (USFWS) as suitable habitat for the long-term viability of grizzlies.

By all objective measures, grizzly bears are “recovered,” and Gun Owners of America joins the Governors and State Wildlife Agencies of Wyoming, Montana, and Idaho and calls for grizzly bears to be removed from the Endangered Species List.

“Delisting” will result in management authority being turned over to the states following American legal traditions established by the North American Model of Wildlife Conservation.  This “Model” grants legal authority to the states for the management of most wildlife species including upland game birds, deer, elk, moose, mountain lions, bighorn sheep, turkeys, resident birds, small mammals, reptiles, and all other species except migratory birds and those on the ESL.

Again, many “Delisting” opponents are trying to restrict your right to keep and bear arms and your right to hunt. These opponents to your freedoms won’t tell you that government-funded lethal grizzly control has been used for many years to ensure public safety.

In 2021, in Wyoming alone, 29 grizzlies were lethally removed by government officials.  Under state management, hunters will likely be used to manage these populations using tightly controlled and carefully regulated hunting.

Wyoming, Montana, and Idaho have a long-term management plan in place to ensure grizzlies do not need to be “relisted”, and they will effectively manage grizzly bears just like they do other wildlife species.  Please call and e-mail your Senators here and encourage them to support “delisting” grizzly bears and restoring the rights of the states to manage this iconic wildlife species.