Urge Governor Sununu to veto HB 564 and HB 696. Tell him that these amended bills are still anti-gun!

The General Court must think gun owners are stupid. 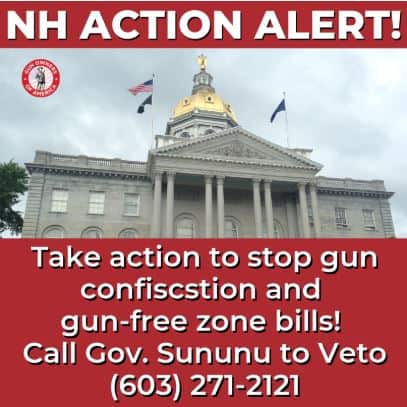 Because without any substantive changes, a House/Senate conference committee has now given final approval to HB 696 — legislation to confiscate guns from families who take care of elderly parents.

There is only one purpose for pushing this bill: to allow anti-gun organizations to claim an anti-gun victory in New Hampshire.

The boilerplate in the bill is exactly the same as the draft legislation being peddled nationally by the Bloomberg and Gifford’s gun control organizations.

And they insist on keeping broad gun confiscation.

The process starts — as with all Bloomberg sanctioned legislation — with a secret star chamber hearing under proposed Section 173-D:5 — at which the defendant / family has no notice, no right to participate and no due process whatsoever.

The first thing the family hears is when the SWAT team arrives in the middle of the night.

What can the court order include?

The answer is that the power of the court is LIMITLESS.  It “includes” certain things, but it doesn’t exclude anything.

This is particularly true because Section 173-D:11(I)(a) demands that police confiscate guns, whether or not a court order exists.

Now, what does the bill mean when it talks about “abuses”?

Well, when the state provides “services” to families with seniors, it effectively takes over the family.

Everything from the type of shower head to the type of bed — becomes a government mandate.  And, when a family member refuses to obey, he or she becomes an “abuser.”

Our legislative counsel was charged with abuse (in another star-chamber procedure) because he refused to force his mother to take Zoloft against her will.

The state — accompanied by the police — walked right into his home.  Under the proposed Section 173-D:11(I)(a), they would now confiscate his guns.

Incidentally, the process of taking away his mother’s rights and putting them in a guardian was also conducted in a star-chamber telephone call in which neither he nor his mother had an opportunity to participate.

Don’t let anyone tell you that HB 696 is not about massive gun confiscation — it is.

Another conference committee met and tinkered with a second bill — it is HB 564, which would impose gun free (criminal safe) schools.

At this time, we are asking all GOA Members to keep contacting Governor Sununu and asking him to veto these unconstitutional infringements.

It would also do well to remind Governor Sununu that he has said, many times, that New Hampshire gun laws are fine and don’t need changing.

This is the exact same position taken by both of his Democrat predecessors.

Please let Governor Sununu know ABOVE that you are opposed to the amended versions of HB 564 and HB 696 and that you expect him to veto those bills.