UPDATED: May 12, 2021 — On May, 10, 2021, the House Criminal Justice and Public Safety Committee voted to send SB 141 to the House floor with a recommendation of INEXPEDIENT TO LEGISLATE.  What this means is that five Republicans joined ten democrats and voted in FAVOR of imposing a waiting period on handgun buyers.

Click here for our latest alert to learn how you can help to convince the House of Representatives to reject the ITL recommendation and vote SB 141 “ought to pass” and end the waiting period for gun buyers!

We are currently being presented with a choice.

A vote for SB 141 is a vote to end gun sales delays and waiting periods in New Hampshire.

But a no vote, even a vote for the committee to retain the bill, is a vote in favor of waiting periods.

That is the choice — should gun buyers be forced to endure a waiting period?

It was two short years ago that Governor Sununu vetoed HB 514, which mandated a three-day waiting period for gun buyers.  Nevertheless, numerous gun owners and dealers have reported waits as long as 4 weeks due to the well-documented problems at the “gun line.”

On Wednesday, April 28, I participated in the remote public hearing on SB 141, click here to see the replay on YouTube.  I also submitted written testimony, which you can read by clicking here.

I was, quite frankly. surprised at some of the people who were opposed to SB 141; and thus, in favor of continuing to force gun buyers to wait for extended periods of time between the purchase and delivery of a handgun.

But here’s the bottom line: Opposition to SB 141 is support for a waiting period for handgun purchases.  That is the issue! 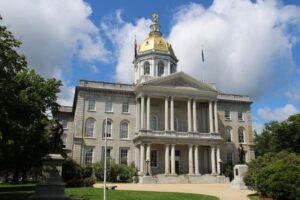 It appears that at least three Republican Committee Members might not support SB 141, and they need some convincing to end waiting periods for gun buyers:

Those of us who have been involved in this issue for more than a day are not surprised by this.  Rep. Welch was one of the Representatives who forced this flawed system upon New Hampshire in 1999.  Click here for the House legislative history and here for the Senate history.

Please be polite but firm when you let these three representatives know that a vote against SB 141, including a vote to retain the bill in committee is a vote to continue forcing gun buyers to wait between the purchase and delivery of a firearm.

After you contact the above three committee members, please use the above form to send a pre-written message to the entire committee.

Have you been delayed or otherwise had your rights infringed by the New Hampshire “gun line?”  Click here to tell GOA what happened.