NH: We MUST end the gun sales waiting period…

Yesterday, May 10, five republicans, decided to side with all democrats and voted SB 141 “inexpedient to legislate” — (ITL). What this means is that 15 members of the Criminal Justice and Public Safety Committee voted in FAVOR of imposing a waiting period on handgun buyers.

THAT IS NOT ACCEPTABLE!

Click here to see who voted for a waiting period for gun buyers and who stood strong for freedom. Rep. Dave Testerman, who was once a strong Second Amendment supporter, made the anti-gun motion. In this case the pro-gun vote was a NAY vote.

Since we were receiving threats that SB 141 was going to be retained by the committee, the ITL vote is less bad than having the committee retain the bill. Now at least, SB 141 be considered by the entire House of Representatives. That is the good news… we still have the opportunity to pass SB 141 and end the waiting period for gun sales in New Hamsphire. We can do this by persuading the House to reverse the committee’s vote of ITL and vote SB 141 “ought to pass.” 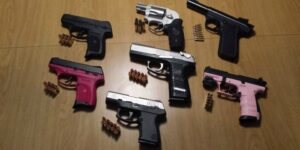 Here is what you need to do, use the above form to send a pre-written message to your State Representatives. AsK all Representatives to vote NO on an ITL motion and YES on an “ought to pass” motion when SB 141 is considered by the House of Representatives.

For additional information on this very serious issue, please click here for an older alert on this bill that contains several links to other GOA alerts on SB 141 as well as an article that was published by Ammoland.

Please don’t forget to use the above form to send a pre-written message to your State Representatives. If you prefer to call your State Reps, please click here for the House Roster.