By now most gun owners are aware of anti-gun groups, such as Everytown for Gun Safety and other Michael Bloomberg affiliates, which are lobbying local and national business owners to ban open carry from their places of business. These groups have pushed stores to display signs which depict “No guns allowed” in order to ban concealed carriers as well.

Now a new threat has arisen, specifically targeting open carriers.  It is known as “swatting.” 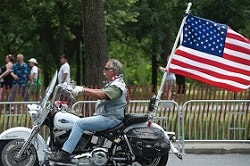 In case you haven’t heard of the term, “Swatting” or getting “Swatted” entails an individual filing a false police report or notifying emergency services that a crime is about to, or has taken place, and that immediate action needs to be taken.

Gun owners have recently become the unfortunate target of these false, and highly illegal, reports.

Robert Dickens became a victim of “swatting” after a stop at a 7-Eleven convenience store in Fairfax County, VA. After legally open carrying a handgun, making a purchase and exiting the store, Robert rode off on his antique Harley Davidson.

Unknown to Robert, an individual at the 7-Eleven called the police and reported that the store had been robbed by a person with a “9mm handgun.” The caller identified Mr. Dickens as the offender, even describing his motorcycle.

Upon seeing several police cruisers in his mirror, Robert pulled over into a parking lot. Immediately sensing something was wrong, he put his hands on his head and notified the officers that he was openly carrying his .40 handgun.

None of the eight police officers on the scene drew a weapon. One asked Robert to turn over his firearm, which was cleared and set aside.

As the officers spoke with him, upon investigation it quickly became clear that Robert had committed no crime and was a victim of a false reporting.

Robert was the victim of “swatting.”

The Fairfax County police detained Robert no longer, returned his firearm, and departed the scene.

Police usually arrive at the scene of a crime, or suspected crime, with adrenaline pumping and heart rate up.

But due to the professionalism of the Fairfax County police and level-headed response by Mr. Dickens, no one was hurt in a confrontation that could have turned deadly had either party reacted hastily.

This story, and others like it, serve as a reminder that some anti-gunners might use “swatting” as a way to harass law-abiding gun owners.

Always be aware of your surroundings and remain calm with any interactions you may have with law enforcement, recognizing that the police may have been given erroneous information.

So keep carrying, but be extra alert to this latest threat.

Chris Stone is the Director of Federal Affairs for Gun Owners of America, a grassroots gun lobby with a million members and activists.

Concealed Carrier in Alabama Saves Wife From Group of Armed Robbers, Shoots One in the Nose