Gun Owners Of America: Fire Speaker Boehner For His Failure To Stand Against Gun Control

GUN OWNERS OF AMERICA: FIRE SPEAKER BOEHNER FOR HIS FAILURE TO STAND AGAINST GUN CONTROL 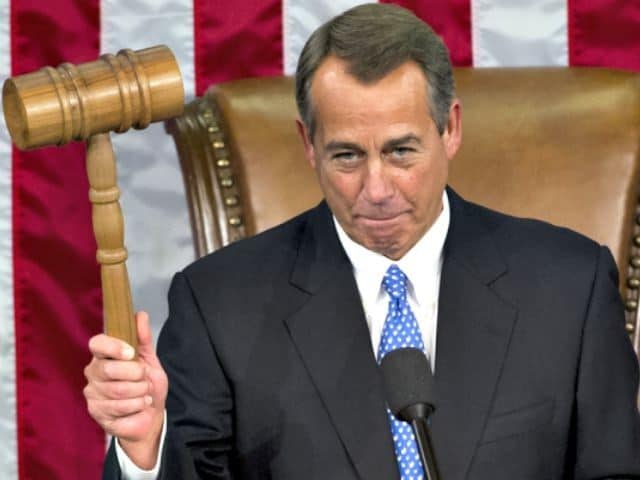 They say “It’s time for Boehner to go!” and stand with Meadows in his efforts to “vacate the chair” via House Resolution 385.

As long as John Boehner is Speaker, your gun rights are in danger. After all, remember in spring of 2013, when the pro-gun community was engulfed in the “battle of the century” over the Bloomberg/Obama gun control agenda? John Boehner could have nipped gun control in the bud by pronouncing that gun control would be “dead on arrival” in the House. Instead, he said that the “House will consider” any gun control proposals sent over by the Senate.

On September 14 Breitbart News spoke to GOA’s Erich Pratt about this campaign, and he pointed to a 2013 story in The Hill which quoted Boehner making it clear that “If the Senate acts on gun control legislation, the House will consider it.”

Pratt also pointed to a piece of government-funding legislation–labeled “Cromnibus” by GOA–which Boehner was able to pass on December 11, 2014, with the help of “Barack Obama and Joe Biden.” Through the support of Boehner, Obama, and Biden, the bill–which contained “several anti-gun provisions“–passed “by a vote of 219-206,” garnering “162 [votes from] House Republicans who campaigned by opposing gun control.”

In other words, GOA sees Boehner as man who lacks the skills to lead on conservative, pro-gun issues, but who can be very influential when it comes to persuading House members to go his way on pet projects for Obama.

For these reasons, they are standing with Representative Meadows and asking other gun owners to entreat their Representatives to stand with Meadows on House Resolution 385 as well.

Why Ted Cruz is Eligible for President