The most amazing debate took place in the Grand Canyon State earlier this year. 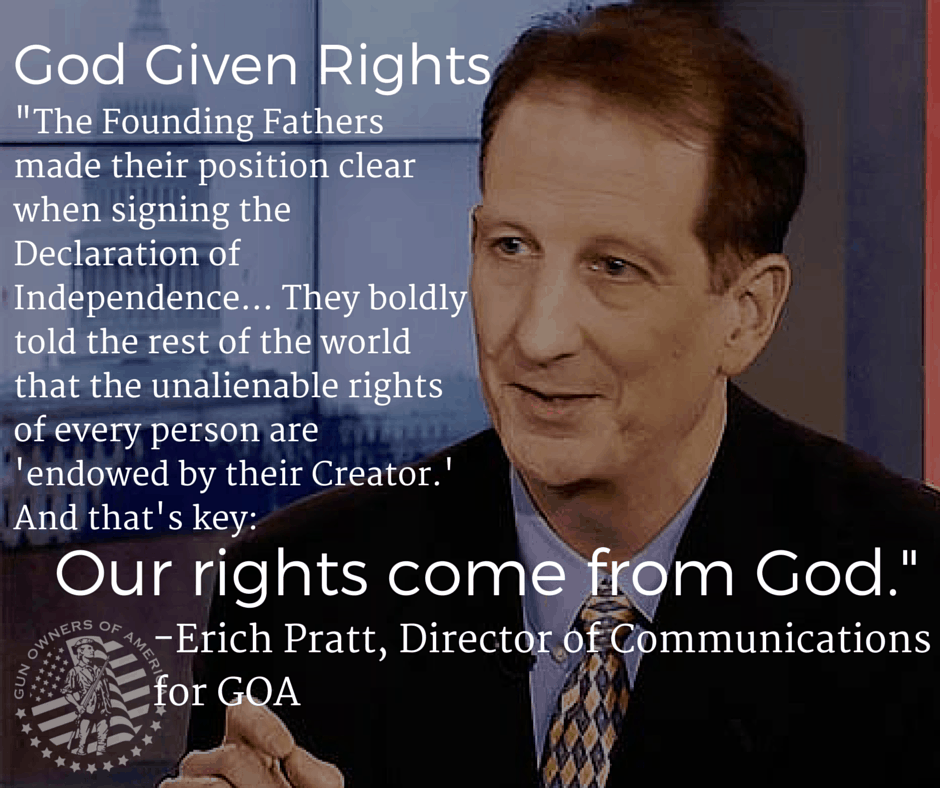 It was a theological dispute surrounding two pro-gun bills that legislators were debating in the Arizona House of Representatives.

The hot topic was:  “Is the right to keep and bear arms a God-given right or not?”

Lest some consider this to be an “angels dancing on the head of a pin” type of discussion, think again.

The answer to this question determines where our rights come from and who determines if there are limits to those rights.

The Founding Fathers made their position clear when signing the Declaration of Independence on July 4, 1776.  They boldly told the rest of the world that the unalienable rights of every person are “endowed by their Creator.”

And that’s the key:  Our rights come from God.  That’s why our Founders could say that our rights are “unalienable” — or that they’re incapable of being infringed.  That means no waiting periods, no background checks, no gun or ammunition bans.  Nothing.

Unfortunately, the notion of God-given rights is eroding.  CNN’s Chris Cuomo, when confronted this year by an Alabama Supreme Court Judge who said that rights come from God, countered that rights actually “come from man.

And one of the Arizona Democrats, who took the anti-gun position during their theological debate in March, claimed the right to keep and bear arms couldn’t possibly be a God-given right since — now get ready for this laugh line — “I know that God didn’t write the Constitution.”

Some might find humor in Arizona Rep. Sally Ann Gonzalez’s comments, but the implications of her views are no laughing matter.

Because here’s the problem:  If rights don’t come from God, then where do they come from?  Do “We the People” decide what our human rights are?

Good luck finding any unanimity there.  The view that denies God as being the author of our rights must ultimately depend upon the 51% majority as the only practical way of defining them.

But then what happens when a majority favors slavery or segregation?  Or favors the infringement of a basic right like the protection of one’s self or family?

What happens is that people become mercilessly oppressed.

Consider the draconian gun ban in Chicago that had left many honest citizens defenseless for decades, thus leaving the city with a murder rate that was frequently the highest in the nation

Not until the city’s gun ban — and later, its ban on concealed carry — was struck down, did they experience a dramatic reduction in murder rates.  Lives have been spared.

In April, an Uber driver in the Windy City used his concealed firearm to prevent a mass shooting, when he discharged six rounds from his weapon to stop a gunman who was firing into a crowd of people.

Not only that, this would have been just one more story where a crackpot goes on a shooting spree … commits a mass murder … and jumpstarts calls for gun control.

Thankfully, a good guy with a gun was not prevented from defending his life, along with the lives of many others.

This is why the Supreme Court’s decision in McDonald v. Chicago was so key.  In 2010, the Court struck down Chicago’s gun ban and affirmed that “self-defense is a basic right, recognized by many legal systems from ancient times to the present day.”

It didn’t matter if a majority of Chicago’s politicians favored gun control.  The gun ban was in violation of the Constitution, which protects a “basic right” that has been recognized from “ancient times.”

Well, our Founders knew just how “ancient” this right is.

Elbridge Gerry, one of the signers of the Declaration of Independence, said that, “Self-defense is a primary law of nature [and] the immediate gift of the Creator.”

As we celebrate our independence this year, we should be thankful for the wisdom and vision of our Founding Fathers.

Had their Declaration not articulated the “self-evident” truth that rights come from God, Chicago-style gun control might very well be the norm throughout the country — and we’d still be speaking British, too!

Erich Pratt is the Director of Communications for Gun Owners of America, a gun rights lobby representing more than one million members and activists.