“The President wants to blame an inanimate object — the gun,” [said] Erich Pratt, spokesman for the Gun Owners of America. “But that just deflects blame away from the real culprit: gun-control policies that leave people defenseless in the face of evil perpetrators who are never effectively prevented from acquiring weapons.” — Newsmax, June 20, 2015

They’re coming for you.

Anti-gun Senators Joe Manchin and Pat Toomey just announced they want to bring back their toxic legislation stripping Americans of their gun rights without due process of law.

And the President is ready to sign this gun ban into law. 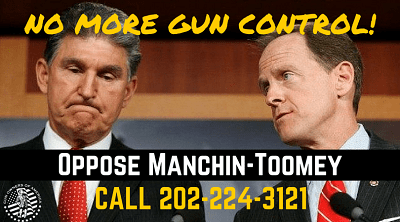 You may recall our battle against the Manchin-Toomey language in 2013. Their legislation sought to BAN many private sales of firearms, forcing countless gun buyers to run to a dealer and submit to a background check before making their purchase.

Thankfully, Senators Toomey and Manchin failed because Gun Owners of America and its members got in their way. According to the New York Times, and other liberal media outlets, GOA was able to put enough heat on the Senate to defeat this pernicious legislation.

The new Toomey-Manchin proposal will be an infringement of Second Amendment rights, and it will do nothing to stop real criminals from getting guns.

Realize that this background check expansion is just a ploy to erect more obstacles to owning guns. The more that people have to seek permission to buy a gun, the easier it becomes for gun control advocates to find reasons to deny them.

We’ve already seen this in the way veterans have been targeted and prevented from owning guns because they suffer from PTSD — symptoms related to their service for our country.

Ironically, the recent South Carolina shooting demonstrates the FAILURE of gun control. The Charleston gunman bought his gun from a dealer and passed a background check.

The result: Nine people died at the church … from gunfire … in a gun-free zone.

Clearly, more gun-free zones and more background checks are NOT the answer.

But making it easier for law-abiding citizens to carry concealed WILL make a difference. That will save lives. And that’s why your Senators should cosponsor S. 498, introduced by Senator John Cornyn (R-TX).

Please note: While The Washington Post is reporting that Senators Manchin and Toomey want to resurrect a new version of their 2013 legislation, they have not introduced it yet. But Senator Manchin says he won’t bring the bill up “until he is sure he has rounded up the necessary votes.”

So that’s where you come in!

ACTION: Use the provided pre-written letter to urge your Senators to OPPOSE the new Manchin-Toomey gun grab.