GOA Will Rate the Collins-Ayotte Amendment as Anti-Gun

GOA Will Rate the Collins-Ayotte Amendment as Anti-Gun 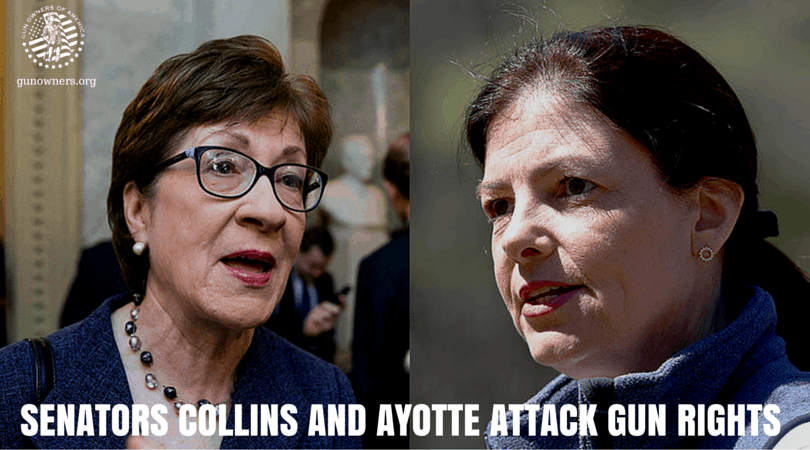 Gun Owners of America urges you to OPPOSE the Collins-Ayotte amendment.

The first and obvious problem is that the amendment buys into the narrative that gun control is the primary solution to the horrific events of Orlando.

Similar to the four amendments voted on yesterday, the Collins-Ayotte amendment would not have stopped Omar Mateen from acquiring a gun.

But unlike yesterday’s Cornyn amendment, the Collins-Ayotte language fails to contain some of the protections for gun owners’ rights that were afforded in the Cornyn text.

Barack Obama and his “puppet press” have done a masterful job of misdirecting attention away from the real issue, which is terrorism and Gun-Free Zones.  But trying to determine how many Second Amendment restrictions our society will tolerate is not the answer.

As our Legislative Counsel explains below, the Collins-Ayotte amendment is an anti-gun amendment, and Gun Owners of America will rate this amendment as an anti-gun vote in its end of year rating.

Collins-Ayotte Amendment is Ripe for Abuse

The central problem with the Collins-Ayotte amendment is the same as the central problem with the Feinstein text that was defeated on Monday.  Namely, Collins allows a highly politicized official to take away constitutional rights by fiat without any real due process — and presumes it can compensate for this by a process to “get your rights back” which is virtually impossible to invoke.

WHAT THE AMENDMENT DOES

The Collins amendment, at its lowest common denominator, allows Loretta Lynch to impose a gun ban on a person if she “determines” the person “meets the standard for inclusion on the Selectee List…” [Section ___ (a)(1)(B)]

Note that all of the scary verbiage in subparagraph (a)(1)(A) on page 2 is irrelevant. Lynch can ban a person from owning a gun if EITHER the “No Fly” provisions are applicable or the individual “meets the standard” for the Selectee List under subparagraph (B).

First, the person doesn’t have to be on the Selectee List.

Second, there is no statutory standard which would prohibit the entire membership of Gun Owners of America and the National Rifle Association from being disarmed under this provision.

The reason is that all there has to be is “credible” information (in the eyes of Lynch) that our activities “relate to” terrorism — not support, not promote, but rather “relate to.”

In this regard, it is interesting that the New York Times has, within the last week, accused the gun lobby of being “complicit in terrorism.” The New York Daily News has urged that we be tried for terrorism-related crimes.

And, earlier in the Obama administration, the Justice Department has included conservative groups, including the gun lobby, in a list of potential domestic terrorist groups.

This differs from the Cornyn amendment, which would require the AG to go before a court with probable cause that the individual was involved in an actual or inchoate crime. In the case of Collins, the AG would be the sole determinant.

WHAT ABOUT THE PETITION FOR REVIEW?

Collins makes a big deal of the supposed right to review.

In order for this “right” to be invoked, the individual would have to be notified.

But we’ve gone through this exercise before with the so-called “right to review” in the NICS Amendments Improvement Act of 2007. In that statute, disarmed veterans supposedly had a “right of review” comparable to the Collins amendment.

Moreover, the process will be made even more lengthy and expensive by the fact that it must be filed in the docket-jammed courts of appeals — which have recently, in all but two cases, been “packed” with anti-gun Obama appointees, largely by use of the “nuclear option.” The non-specific “expedited consideration” provisions may help a little, but not much.

The “right to review” is triggered by an official notice of denial issued by the Attorney General.  But section _____(a)(2) specifically gives the Attorney General the written statutory right to refuse to assign a unique identification number, apparently indefinitely. And most large retailers refuse to sell a firearm until this unique identification number is received, even if they are legally entitled to do so.

The Justice Department has been conspicuously obstinate in refusing to comply with its statutory requirement that it inform prohibited persons of the reasons for their prohibition — with the bureaucratic equivalent of “So sue us!” And, if you can’t figure out the reason for your denial, you can’t comply with the 60-day appeal filling process.

Incidentally, if persons subject to denials have suffered these consequences, persons subject to inaction have had an even worse time getting a response. Last fall, the Justice Department announced that it has decided, illegally, to simply defund the processing of appeals.

But there are other problems with Collins. Under section ____(d)(3), the AG is specifically authorized to classify and withhold any information she chooses. A really expensive attorney with a high security clearance might be able to get around this, but still wouldn’t be able to circumvent assertions of “privilege.”

Under section ____(d)(4), discovery is prohibited, except under extraordinary circumstances. Part of the proceedings will be “ex parte” (section ____(d)(6)), which means that the most important parts of the adjudication will consist of meetings, in chambers, between the judge and the government -– with the petitioner and his attorneys excluded.

The procedure is de novo, but it is predicated on a “nothing-burger” standard that rests on the Attorney General’s perceptions.

After the fact, the court “shall” award attorneys’ fees to the prevailing party. Collins may not understand that “legal fees” provisions have been in place for people fighting the government since the Buckley amendment in 1976. But they have had little impact for non-wealthy litigants forced to pay the costs of litigation up-front and faced with, at best, a slight chance of reimbursement at the end of the process.

In short, this sham procedure represents no remedy at all in the real world, and it certainly does not offset the fact that the individual’s constitutional rights were stripped preemptively by fiat by a politicized official with virtually unfettered discretion and a demonstrable animus toward guns.