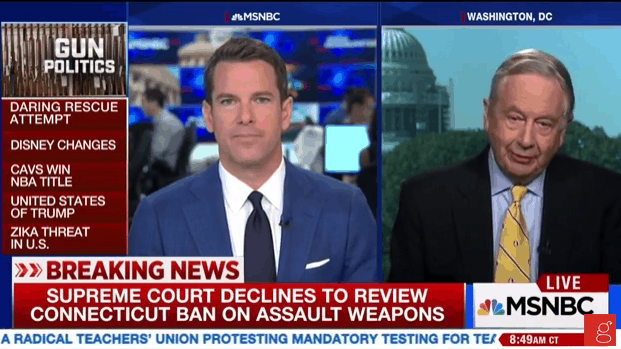 The terrorist attack on a gay nightclub in Orlando on June 12 has sparked the usual knee-jerk reactions from politicians and the liberal media for more gun control legislation, in the mistaken belief that such laws might have prevented the attack as well as future attacks.

One of the biggest lies with regard to the Orlando attack is the type of weapon that was used. The media are pushing the narrative that Omar Mateen had an assault weapon—originally identified as an AR-15 before being correctly identified as a Sig Sauer MCX—and that it is a “military” weapon.

MSNBC’s Thomas Roberts tried to perpetuate that lie in an interview on Monday with Larry Pratt, executive director emeritus of Gun Owners of America:

Roberts: So do you think that all Americans should have access to consume and purchase the same style of weapons as our American military?

Pratt: Well, actually, we make a distinction. The American military uses fully automatic firearms. The firearm that was used in Orlando was a semiautomatic that has been available for probably fifty years on the American market. So we’ve got to be careful that we don’t conflate things that are not the same at all.

The American military uses a firearm that can be purchased in the United States, but it’s very difficult, it’s highly restricted. Some states ban them altogether and we’re not talking about those kinds of guns. We’re talking about what’s been on the market since the 1950s.

Roberts: The AR-15, those style assault rifles, yes. The Sig Sauer MCX was only introduced in January of 2015. So, it’s pretty fresh to the marketplace.

Pratt: But it’s not substantially different from the AR-15. It’s a semiautomatic. It accepts a large box magazine. Nothing revolutionary about that.

Pratt: The type of weapon is substantially irrelevant. What is relevant is it was another murder magnet. Another gun-free zone.  That’s what we’ve got to put a stop to.

Roberts: I would dare you to say that to the families who lost a loved one that the weapon used is irrelevant to why their loved one is dead.

Pratt: I would be very happy to have a chance to explain to them that it was the politicians that set their families up for this.

Since the attack, gun sales in the LGBT community have surged and membership in the Pink Pistols, a national gun club for homosexuals, has doubled, proving that owning a firearm is the best protection they can have. That is a fact that has eluded Roberts in his anti-gun zeal.

Since When Does the Pro-Gun GOP Advance Gun Control Legislation?