Several gun owner rights victories have occurred recently in the united States Senate, including a vote that shut down the United Nations Arms Trade Treaty. Among those victories is Senator Jim Inhofe’s amendment, which Gun Owners of America claims has the potential to shut down parts of the United Nations if they stay on course with the ATT.

First, Senator Mike Crapo (R-ID) added a committee amendment to deal with Obama’s DOJ and their anti-gun Operation Choke Point. As a result, the bill wasn’t even taken out on the floor of the senate. Well done, Senator Crapo.

As you recall, Operation Choke Point was a huge overreach of federal powers by the usual criminal, Attorney General Eric Holder, which sought to strong arm gun businesses and other businesses the Justice Department deemed “risky” business, in order to put pressure on banks to sever ties with gun dealers.

Also, Senator Jim Inhofe (R-OK) was able to put in an amendment to shut down the United Nations Arms Trade Treaty. The vote was 59-41. 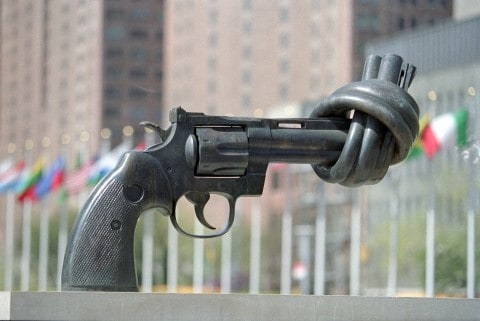 Gun Owners of America said that the amendment that Inhofe put forward was “so far-reaching that it has been accused, probably correctly, of potentially shutting down parts of the United Nations if that organization continues to push the ATT.” …

“Senator Moran and I have shown time and again that the Senate will not ratify the U.N. Arms Trade Treaty. Today, the Senate also spoke against taxpayer dollars being used to help fund the treaty’s implementation,” Inhofe said. “The President should remove the United States’ as a signatory nation on an ambiguous treaty, which does nothing to guarantee the protection of personal gun ownership and could potentially interfere with the United States’ ability to aid allies.”

GOA legislative counsel Michael Hammond spoke to Freedom Outpost and explained that the Inhofe amendment would defund particular portions of the UN related to the ATT.

“This amendment would clearly defund the United Nations Arms Trade Treaty Secretariat or any international within the UN or outside the UN, which has been deemed to have been created to support the implementation of the ATT,” said Hammond. “I take that to mean in whole or in part.”

Hammond said that this is at the very least a “placemark” as to defunding anything in the UN that would advance the ATT. This is a good thing as the United Nations is the vehicle by which American tax dollars are being used, under the guise of helping the world, to bring in communism on a global scale.

Of course, over 130 congressmen said that they opposed the ATT in 2013, but more importantly, the senate has already passed a resolution informing Barack Obama that they would not ratify it. As such, the treaty remains null and void, according to the US Constitution.

The treaty also poses many dangers to undermining America’s sovereignty and the Second Amendment, including a national gun registration.

The senate failed to fight off eight anti-gun amendments put forward by Democrat Senators Chuck Schumer (NY), Dick Durbin (IL), Chris Murphy (CT) and Richard Blumenthal (CT), which, according to Gun Owners of America, “dealt with fraudulent non-issues like guns and domestic violence, guns and sex trafficking, and so forth.”

According to GOA, “The Rubio/Jordan bill (S. 874/H.R. 1701) would repeal Washington’s gun license requirement.  It would repeal the semi-auto ban and the microstamping requirement, and would turn D.C. into a “shall-issue” jurisdiction — an achievement which, while it wouldn’t be a big deal in pro-gun parts of the country, is a huge deal in this cesspool of anti-gun liberalism.” …